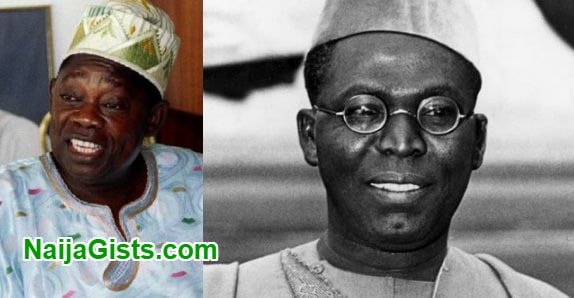 How Abiola Begged Awolowo For Forgiveness

A Flash Back Report By The News Magazine

Chief Obafemi Awolowo was at home one sultry day in the mid-80s when he was informed that an unlikely visitor had come to visit him. When he was told it was Chief Moshood Kashimawo Olawale Abiola, his archenemy, so to speak, Awolowo was stunned. It sounded like an April Fools’ Day joke, but he decided to receive the visitor if only to find out his mission. As Abiola spotted the old man coming in his direction, he threw himself flat on the ground in the Yoruba obeisance reserved for an elder.

On getting up, Abiola embraced his old nemesis, apologizing for breezing into the old man’s home without notification. He did not stop at apology; he demanded food. “Baba, I have come to eat lunch in your house today”, Abiola announced. “Eat lunch in my house?” a surprised Awo asked, as if he wasn’t too sure what he heard, adding “As a rule and habit, I don’t eat lunch.” “Baba, I am hungry. I want to eat eba,” Abiola insisted. As arrangement was being made to prepare lunch, Awo sat there bemused. After some waiting, lunch finally arrived and Abiola ate like a truly hungry man. He cleared every morsel on his plate – a sign that he enjoyed the food.

After lunch, Abiola formally explained his mission. He had come for peace. He had come to ask the old man to forgive him of all his political transgressions. Everything, he had done, he informed the old man, was political, not personal. He said that even while playing politics he still respected and admired Awo as a leader whose achievements would forever remain evergreen in history. Awolowo was touched; he agreed to forgive Abiola and even prayed for him. Chief Abiola was a paradox- a man of complex extremes, a man you could love to hate and yet hate to love at the same time. He was a man of destiny. Fate beckoned him to toss hat into the political arena to vie to be Nigeria’s President under the transition programme of the military government of our mutual friend, General Ibrahim Babangida.

A wealthy man, Abiola was also an epitome of generosity, who supported people and causes he believed in. He was a man with a large heart. I had not always been his friend, though I had never regarded him as an enemy. Our relationship had started on a quarrelsome note. March 1986 afforded me the opportunity to appraise him publicly. I was a guest at the New Nigerian Newspaper forum in Kaduna where I was asked a question about him and I bared my mind about this stupendously rich man whose wealth naturally put him under all kinds of pressure and made him behave sometimes inappropriately. I told the New Nigerian in an interview published on April 1,1986. Each time I think of Chief MKO Abiola, rather than hate him in spite of all that he has done to me, I have great sympathy and pity for him. Any human being who stumbles on the kind of money that Chief MKO Abiola stumbled on would naturally go through all kinds of pressures. Extended family pressure will be there, societal pressure will be there, group pressure will be there, ethnic pressure will be there.

On top of all these, you have sycophants putting their pressures, flatterers and flag wavers putting their pressures on such an individual. I suspect that all these pressures are working on Chief MKO Abiola in terms of his attitude to certain people, especially in relation to me. This is why I say I have great sympathy because Chief Abiola doesn’t know me at all. He and I have never had an occasion to sit down like this for any reasonable length of time. I have never been to his house and don’t know the way he lives; he doesn’t know the way I live. I have never been to his office. I have only been to his residence in London once when Dele Giwa and I travelled, and he arranged that I meet Chief MKO Abiola. So you find that Chief Abiola based his approach and attitude towards me on hearsay. On what he has heard from other people, I take my case as an example of how he arrives at some of his attitude to people.

Continue Reading
You may also like...
Related Topics:abiola, awolowo, forgiveness