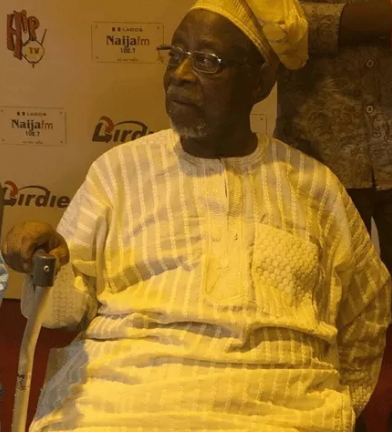 May 27, 2017 – Moses Adejumo Baba Sala: The Day I Found Out My Brother In Law Sold Master Tape Of “Orun Mooru” Film To Pirates

At the age of 80, veteran actor Moses Adejumo a.k.a Baba Sala has traversed the tough terrains of life and survived the greatest of the most turbulent winds. He has climbed the highest of the mountains of life.

Rising above all has not been easy but Baba Sala has been a spring where those coming behind drank from to reach great heights. But, will people drink from this spring for long given his fast failing health? With his age, can he still illuminate the lives of all and sundry?

Saturday Telegraph visit to the residence of this ace actor in Ilesa, Osun State, revealed that, the pace setting icon in the film industry is in a terribly bad state of health as he is presently suffering from hearing impairment and compounded bad sight making it impossible for him to see and hear.

With the aid of his youngest wife, who continuously whispered questions into his ears, the ailing star managed to pick a few of this reporter’s questions and responded accordingly even as he clutched his walking stick.

While speaking on what could have caused his ill-health, the actor turned evangelist stated that, he had been having issues with his health since 1978 when one of his brothersin- law (name withheld) stole his master tape of “Orun Mooru” film and pirated it. “I and my two wives had psychological traumas during this period to the extent that it was so tough for many years.

“We nearly went mad as we ran everywhere in search of the missing master tape of the film.

We fasted and prayed copiously to locate the whereabouts of the film then but when I later discovered that it was my brother-in-law that stole the film and gave it out to those that pirated it, I wept uncontrollably but there was nothing I could do because of the person involved.

“Stealing of the film threw me into a state of confusion and caused a lot of setback for me in the film industry.

It retarded my zeal at initial stage before I forged ahead later with absolute optimism to put the problem behind me.”

While remembering the death of his two wives that stood solidly behind him during the travail, Baba Sala, said the missing film contributed to their early death and maintained that their names were and are still written in gold in his mind.

While appreciating God for him kindness upon his life, Adejumo said, he would forever be in the vineyard of God.