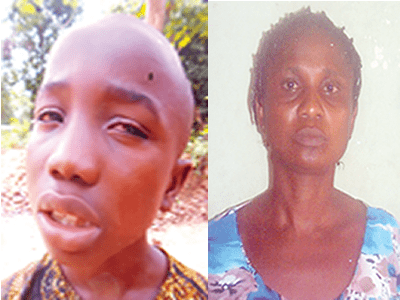 Before Mrs. Oluchi Adibe, 38, went to enrol her son in Good Shepherd Nursery and Primary School, located at Dikenafai in Ideato South Local Government Area of Imo State, she had made inquiries and told that it was a good school.
Armed with that information, she enrolled Chimbuchi Adibe in the school. According to her, all she wanted was for her son to become educated; she never bargained that the school would someday blind her son and turned its back on her. But that was exactly what later happened. Nine-year-old Chimbuchi, a primary three pupil, is about to lose his sight in his left eye, if prompt surgery is not quickly carried out.
The boy was diagnosed of cataract after a teacher’s cane in the school got into his eyes.

Oluchi said: “Blindness is what my husband and I are trying to check. I’m scared and worried. I don’t know what else to do. I have been praying that God should help us by helping our son.”

Since January 31, peace has flown out of the home of the Adibes. Oluchi said that the family no longer sleeps with their two eyes shut because of Chimbuchi’s condition. “We have borrowed money and still need N135,000 for the surgery,” cried Oluchi.

Oluchi, a mother of seven, told our correspondent that she sells pap, while her husband is a commercial motorbike rider. They live in Imo State. Life has never been easy, especially financially, but they have been coping.
This present problem, however, appears to be too overwhelming. To do everything possible to save her son’s eyes, Oluchi and her husband, Rufus, have resorted to imploring well-meaning Nigerians to come to their aid.
She explained that she still vividly remembered the fateful the day of the incident like it was yesterday. The boy had returned from school, crying in pains.

She said: “It happened on January 31. My son left home healthy, with two good eyes, but returned with a damaged eye. My son is a twin. He told me that his teacher, Miss Chibuzor Kenneth, was flogging a pupil when the cane mistakenly got into his own eye.”
Chimbuchi bore the pains in the eye until he got home.

She said: “I noticed that the eye was turning white. I went to the school. The most painful thing was that the school didn’t even think of bringing him home or to give him First Aid. He came to meet me at the market, crying and rubbing his eyes. When he told me what happened, I was angry. I marched him back to the school. I met the proprietress, Mrs. Concilia Mbaegbu. By then, the teacher, Chibuzor, had already gone home. When I met the proprietress, she told me that she was not around when the incident occurred.

“She said that she learnt of the incident from some students. I was so angry with her nonchalance that I left Chimbuchi in the school with her. I later went back to pick him and started First Aid treatment myself. In fact, the proprietress wanted to fight me. She tried to intimidate me; she said I was going round town, telling people that my son was flogged in the eye in her school. She said that I wanted to ensure that they shut down her school. She threatened to deal with me,” Oluchi added.

After discussing with her husband, the couple went to Dikenafai Divisional Police Station, Ideato South Local Government Area, to report the matter, hoping for an arrest, investigation and financial assistance.
Oluchi said: “The policemen said that they couldn’t go to the school or make any arrest without money.

They asked us to bring money, but we didn’t have. They didn’t mention a specific amount. They just asked for money. They said we should leave. On the day that we went to the police station, we went with Chimbuchi. The policemen saw his eye, but still didn’t care to go to the school.”
According to Oluchi, by Saturday, Chimbuchi could no longer see with the eye.

She said: “Mbaegbu later asked me where I would like my son to be treated; I suggested we should go to any eye clinic or hospital. She said she wouldn’t be able to go on that day; she suggested Monday, I accepted. By then, my son’s eye was emitting water. I quickly rushed him to a nearby hospital. On Monday, we waited for the woman but she didn’t come.

“We went looking for her; when we saw her, she said that she was at the school, waiting for us to come. My husband asked her if we are the ones that should be looking for her, or she should be the one looking for us. She started quarrelling with us. In fact, we have gone to about four hospitals because of Chimbuchi’s eye.

We have also gone to the General Hospital, Calabar, where we met a white man. He told us that the solution to Chimbuchi’s eye was surgery. We were billed N135,000. The white man initially said N150,000, immediately, my husband and I burst into tears, begging for a reduction.

“While running up and down looking for solution, we spent over N75,000, most of which we borrowed. In spite of the N75,000 that we spent, the eye continues to deteriorate. After the visit to Calabar, we went to show Mbaegbu the bill. She said she would bring only N15,000 out of the N135,000.”

According to Rufus, he and his wife were devastated when they were told that the boy had cataract.
He said: “It was because we couldn’t raise the money that we went to the school, thinking the management would help. The school initially refused to give us audience, but later gave us N15,000. All our attempts to make the proprietress to give more, were abortive.”

The school management has, however, denied that such an incident occurred in the school. When our correspondent visited the school, Mbaegbu said she was not in a position to speak to journalists. Later, a man who posed as the ‘principal’ of the school denied that such an incident ever happened in the school. According to the man, who refused to mention his name, the allegation was a blackmail aimed at tarnishing the image of the school.
On why he thinks someone could be blackmailing the school, the man simply insisted: “I said it is all lies.”

Retorting to allegation that the incident didn’t happen, Oluchi said: “The school is lying; there were several witnesses there, including students and market women. When the incident happened, God brought a man of God from St Peter Anglican Church, which is located opposite the school to intervene.

This pastor was the person that directed us to all the hospitals we went to. The pastor is alive and can answer questions on what transpired on that day. I also went to the highest king in Dikenafai, Eze Ebubedike, he saw my son’s eye and shed tears.”
Mrs. Adibe Oluchi can be reached on 08147544935. Those who want to help can pay into Skye Bank account number: 3029543304 in the name of Rufus Adibe.

Continue Reading
You may also like...
Related Topics:blind, boy, teacher

Fake Pastor Using Death Prophecy To Lure Victims Arrested
Welder Slams Padlock On Apprentice Head For Licking His Honey, Orders Him To Continue Working As Blood Gushes Out Of Head