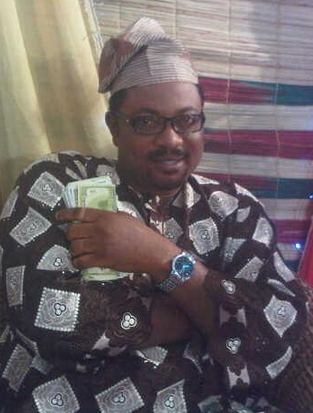 July 5, 2015 – Nigerian Actor Kunle Adegbite Blasts Gay Men Disturbing Him “It Doesn’t Make Sense For Men To Sleep With Each Other””

How do you feel about media speculation about celebrities and have you been personally affected?

Even 2face sang a song which says: “If nobody no talk about you, then you are nobody.” So I believe life goes on because I don’t live my life on rumours. My wife is a very understanding person, she believes whatever they write is normal, considering the nature of my job. She just laughs it off. Even before we got married she used to follow me to locations times without number, I could remember she was there when I was producing my first film . It is just that right now she has no chance due to the nature of her work. Aside going to work, the home front is there for her to be in charge.

What is the craziest comment you’ve ever received from fans?

One day a guy walked up to me and said he doesn’t like me because I am good looking, so I asked him why, he then said his wife usually talks much about me whenever they are watching me on TV. I just laughed at the comment, but I was surprised to hear such.

As one of the good looking actors, have you ever been embarrassed by other men?

Yes o, this happens often, some men do approach me asking me to become their lover, but I just laugh and tell them I am not the type, I love doing that thing with my woman and I don’t think it will be reasonable doing it with a man.