Most people know you today as a filmmaker. But prior to this you acted on stage. You started your career as a writer and an actor…

I actually wanted to be a medical doctor. I wanted to study medicine, but ended studying Dramatic Art at the University of Ife, now Obafemi Awolowo University (OAU)…

I think that is what God wanted me to do. Nature called and I answered. I have always been a writer even when I was in secondary school. I remember I broke my leg when I was playing football, at the age of 13 years. And while I was carrying a POP cast on my right leg, my friend’s mother (she is late now), brought me a lot of books – Harold Robins, James Hardley Chase and other writers. I fell in love with reading; I started developing skills in writer. So, I started with reading books, and I fell in love with writing. I wrote my first unpublished novel at the age of 17. It was about the Maroko area of Lagos, then a slum, that very soon it would transform into a megacity. The book is still there unpublished. But today, the area called Maroko has turned into Lekki. So, that was how it started; and today, I have done many other drama productions – stage and television. I have always been a very proactive person when it comes stage, writing, and of course, television. That is how I found myself where I am today. I thank God for everything.

What kind of books did you read then?

I read books by Harold Robins, James Hardley Chase. I also read books by Wole Soyinka, China Achebe. I fell in love with their writing, and I felt that I could also be a good writer. After school, I found myself in Nigerian Television Authority (NTA) as a writer. I worked under the late Kalu Okpi, who was then NTA Chief Script Writer. That was how it blossomed. To God be the glory.

You are the president of AMP. How has it been?

As president of AMP, it has not been easy; it has been tough. But the fact is, nothing good comes easy. It is something I wanted to do. We face challenges, and don’t forget, whatever we do in this industry, the first challenge that we face is funding, just like every other establishment. But we have not let that deter us; we have been consistent. We try to get the best for our members. There are other things that we are trying to do to make sure that things work. Very soon, Nollywood would have its pride of place in Nigeria just like Hollywood has it in America, and the world would come to appreciate Nollywood better.

Let’s talk about ‘Palace’, what happened to the programme?

‘Palace’ was created by me. I wrote the initial episodes, and then my colleagues, Tunji Bamishigbin and Charles Novia, became part of it. What inspired it? I am a writer, I look at the world, I look at the society; I listen, I watch, and I interact with people. And, don’t forget, writers have foresight, they see ahead of time. Palace is the story of a family. We all know that in this life, if you have money or when you are successful, people want to come to you; people want to come to a palace. Even when they don’t know how you got the palace, they want to come there. They want to be part of the palace; they want to take from the palace. That’s the idea behind it. ‘Palace’ made its debut on television in 1997 and was stopped in 1999.

Why was the programme stopped?

Funding. You will recall that at that time, DAAR Communications plc, owners of African Independent Television (AIT) had challenges. That was when they were owing consortium of banks… and because of the problem, it became difficult for us to produce, because AIT was funding the programme. That is why we stopped. But to God be the glory, ‘Palace’ is coming back again, and AIT is funding. Dr. Raymond Dokpesi felt that we – my colleague Tunji Bamishigbin and I – should bring back ‘Palace’. Don’t forget that before now, people see us and are still asking “what happened to ‘Palace’?” The good news is that ‘Palace’ is coming back on Sunday, July 22, on AIT. So, be ready to watch good soap, watch, learn and go out and practice what you’ve learnt from Palace. In terms of concept, quality and so on, it is going to be the best. That is why we – cast and crew – went to Abuja. It is costing us a lot of money but we want to the best, be the best in whatever we do. Dr. Raymond Dokpesi believes so much in me and in my colleague, Tunji Bamishigbin. We’ve been friends since 1991 when we did ‘Fortunes’ in his house. We feel also that ‘to whom much is given, much is also expected’, and that is why we are giving back not just to Dr. Dokpesi, to DAAR Communication, to AIT, we are giving back to Nigerians, to the world. Don’t forget, those days many years ago, ‘Palace’ beat programmes like ‘Egoli’, ‘The Rich Also Cry’ and others. ‘Palace’ was adjudged the best in Africa. So, by the grace of God, this time around, Palace is going to be adjudged the best in the world. So, be expectant; be ready to see the best in terms concept, costuming props, locations and so on, also in terms of storyline… 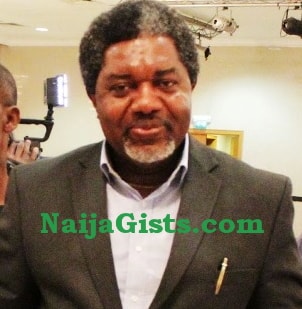 What happened to Fortune?

Just like every Nigerian production at that time, Fortunes was stopped because of issue of funding, and rancour. One of our colleagues, Zeb Ejiro, had some issues, and he went to court. Even though the case was quashed, NTA felt because we had gone to court it could no longer continue with the programme. So, the programme ended abruptly. Hopefully, some day we may actually revive Fortunes. It is not impossible.

How would you describe Ralph Nwadike?

I am just a Nigerian, a father, a husband, and a wonderful guy who loves my country very much. And I hope that the killings we’ve seen in this country will stop so that Nigeria will have the pride of place in the comity of other nations. That is my prayer.

There is the nagging issue of sexual harassment in the industry. What are your thoughts about this?

I heard about it too but I have not seen it. And, I keep on saying something, which is that a consensual thing between two adults is not harassment. The woman can say, ‘Sorry I am not interested’. It is simple. So, nothing like harassment, somebody must chase or toast somebody, if the person refuses, it does not mean it is harassment. It is a toasting affair. So, I don’t think there is sexual harassment in the industry.