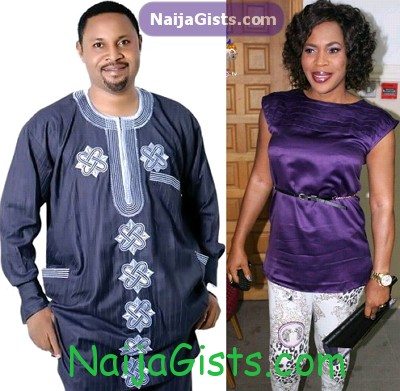 Nigerian actor Saheed Balogun aka Saidi Balogun, a popular face to Nollywood Yoruba movie fans worldwide has remained on top of his career since he started years ago. naijagists.com

The talented Yoruba actor who spent most of his early years in the North claims he wasn’t resting on his oars.

In this recent 2013 interview with Nigerian Tribune‘s SEGUN ADEBAYO, the actor speaks on his latest flick, his ex-wife, Fathia Balogun and girlfriend Funke Adesiyan among other issues.

You led the pack of actors and actresses to Ondo State during the re-election campaign of Dr. Olusegun Mimiko as the state governor, but your decision was said to have pitched you against some of your colleagues in the industry who campaigned for Rotimi Akeredolu.

What informed your decision?

I have promised not to talk about this issue again because of the unnecessary dust it raised prior to the election and afterwards. The truth of the matter is that I did not vote for the party but for an individual whose style of leadership I so much love.

I have known the governor before the election and I had been planning to do some projects with the state government before the election, but when I was invited by the governor to lead his campaign team, I couldn’t have said no. And, let me make something clear to you today and some people who have been going around spreading false tales about my relationship with the governor, I don’t regret voting for him and I will never regret my decision.

It was rumoured that your involvement was financially influenced, are you saying that it had nothing to do with money?

What do you mean by it was financially influenced? If the governor required for my services, are you saying he won’t pay me for that? I am a professional actor for crying out loud. Let me explain few things to you for the sake of this interview. When I was invited, before I said yes to the offer, I had weighed the options before me. I did not follow the party, I followed the wisdom he possesses.

During campaign, his children followed him throughout and I asked him why he decided to have them on his train, he told me that everybody is working to achieve a goal. He also said that he does not believe his children were different or more special than any other person in the team, so if everybody could rise to support him, what stops his own children from following them to the nooks and crannies of the state to campaign.

You haven’t answered my question…
You mean if my decision was influenced by money? I can tell you categorically that you are wrong. Let me explain to you this way. When I clocked 45 years old, last year February, somebody very close to the governor’s heart also clocked 45. Governor Mimiko loves wearing Ankara; I produced an all cast Ankara movie last year and Ondo State was created on February 3 and the governor was born on October 3. I don’t want to bore you with the things that make our coming together unique, but trust me, the governor has a very good heart. So, if he had paid me, I am sure he did that because I offered him my services.

But you were said to have been approached by some key figures in the opposition party…
Yes, I was approached by a sitting governor, but I don’t want to mention his name. We chatted for a couple of hours and days before I decided that I was going to campaign for Mimiko. The man tried to convince me into changing my mind, but I was not convinced. I don’t have anything against anybody, I just did what I felt was the best for me as that time. No regrets though.

Is it true that you are broke?

This question is very interesting, because I don’t know why some people would have assumed that I am broke. How did they arrive at that conclusion?

I don’t want to say anything about being broke or not, because even if I am, how do I convince them it is not true. The truth is that I don’t like responding to issues like these. To me, they are baseless and silly. I am not broke. I thank God for what He has done for me and I don’t have to share what He has done for me with anybody on the pages of the newspaper, because I want people to know that I am living well.

I have been able to achieve some of the things I had set for myself, as young man, when I was growing up. So, I have every reason to thank God for His loving kindness over my life. You are granting this interview with me now; you should be able to tell if I am broke or not from my appearance and the little you have seen since you got here today.

How did you manage to raise money to shoot these movies?

Getting sponsors has been the major problem confronting the movie industry. It is really a big threat because it is forcing a lot of good producers into mediocrity. Raising money has not been easy, but I thank God that I have been able to attract a couple of sponsors who believe in my work. These people have seen what we have done before and they were impressed. So, if we come up with any new project, they will surely throw in their support.

Before now, you hardly appeared on other people’s movies but it seems that you have rescinded that decision.

You were reported to be jumping from one location to another. What brought you back?

I guess that’s why some people assumed that I am broke. I have been busy with a handful of projects, since the middle of last year. That’s why I have not been frequent at locations. Another fact is that if your payment does not go down well with me, I may not take your job. But above all, I didn’t come back because I had run out of cash.

Come to think of it, I am a public figure and I engage in other projects. I have raised my game to a very meaningful level in the industry that I don’t have to wait until I feature in movies before I could put food on my table and smile to the bank. The kinds of projects that had kept me busy were time-consuming that I had to drop other things. I don’t want to produce movies that won’t tell the story I want.

What are the projects you are talking about?

I released Eti Keta last year, an all cast Ankara movie, but the production had started before then. I have released Ala mi Aye mi, Modupe Temi, a two cast movie and right now, I am working on releasing another one, You or I that was shot in three or four different countries, Spain, South Africa, America and Nigeria. These are multi-million naira projects and we had made sure that nothing goes wrong with the production. I have set a standard for myself in the industry and my aim is to beat that standard each time I churn out a new project.

You were rumoured to have been lined up for the mouthwatering Globacom ambassadorial deal, but it did not materialise. How did you feel?

I don’t know about any deal. If they had approached me with a deal, I may take it and I may not. You never can tell. It depends on the condition of the contract. I appreciate what Globacom is doing to promote our industry, but a lot still needs to be done by other well-to-do Nigerians so that we can move the industry forward. If they had approached me, I would gladly welcome them with both hands.

But why do you think the deal was put off?

I don’t know about the deal, so I can’t tell you why it was put off. Who does not like a good thing? May be when they approached me, I will gladly ask them why they called off the deal in the first place.

You started as an actor before embracing producing that has brought out the best in you. Which do you enjoy most?

Honestly, I love acting and I am kind of missing it lately. But I have been in the industry since the early 80s. I started with Enu Orofo. I actually started as a stage person. It became imperative to build on the experience I had garnered over the years. I had been producing one man show across universities in Nigeria a long time ago. What you are seeing now had started way back, but it is getting more attention now, because everybody now appreciates what we do.

What is happening to the music aspect of your life?

Entertainment is general. Eddy Murphy sings, Will Smith sings and his son also. Late Hubert Ogunde and Isho Pepper sang. If you cannot learn like this, forget it. I will still go back into music very soon, but, for now, I am focusing more on movie production.

Why do you think Yoruba movie producers don’t pay actors well enough, compared to their counterparts in the English sector?

It is not peculiar to Nigeria alone, it happens even outside the country. The solution is simple, if you cannot meet up with my fee, then it is not necessary I appear in your movie. I have decided now that if you don’t have a big money, don’t call me to your production, I won’t come.

At 46, you should be getting tired of staying single. You once said that you don’t plan to quit bachelorhood then, are you planning to remarry now?

I don’t want to talk about my marital life, for now. I would really love to talk about my job because that’s what I am particular about as far as I’m concerned. I am enjoying bachelorhood more now because it gives me enough time to think deeply on how I can better the lot of those who are looking up to me. I also want to concentrate on my new movies. I have a girlfriend that I love and respect so much, but I would like to keep it like that for now.

Is your girlfriend also in the movie industry?

There you go again. I don’t want to drag her into this interview.

Are you scared to talk about her because your former girl friend, Funke Adesiyan, was an actress and the relationship ended on a sad note?

Some issues are better kept undisclosed, so that you don’t raise another dust that would take many months to settle. As you can see, I am doing fine. I don’t want to talk on who was that or when did that happen and to who.

So Fathia Balogun’s chapter has been closed in your life?

I knew you were heading for that question when you started playing around with your questions. Anyway, I love the way you have coined it, but the fact is that I won’t talk about Fathia. I will just love to say no comment, if I am permitted to use that sentence.