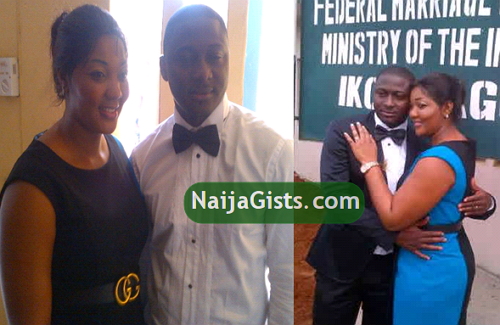 According to a reliable source, Uche Iwuji met Juwon lawal in London few months ago at a party. The lovers immediately took their romance to a new level.

The lovers had their reception at Oriental Hotel in Lekki, Lagos Nigeria.

During an interview with Nollywood Infotainment magazine, the couple spoke at length on how they met each other.

Juwon Lawal who said he care less about gossips said the following:

I don’t believe in rumours. I beleive in personality. I’ve stayed with
her and she’s one of a kind, she’s selfless, loving with a wonderful
heart and is also God fearing. Uche is my wife with whom I am well
pleased. She’s my sister, my friend, a loving wife and will make a
wonderful mother to my children.

How I Met My Husband, Juwon Lawal – Actress Uche Iwuji

While in London, one of my friends whom I hold in high esteem came for my birthday celebration and told me about one of her clients that is still single who would like to meet me. She knows him well as he has been a long standing client of hers.

Initially, I told her I was not interested in meeting anybody, but she
insisted and told me this guy was a good person but that it will be nice
for me to speak with him and know if he is my kind of person. She went further to say that he’s a kind, selfless God fearing man, and being that she’s someone I trust her judgement of people I agreed for him to call me, from there we got talking and the rest is history.

Honestly, I can’t thank God enough because he’s given me my friend,
husband, brother, everything that I’ve ever asked for in a man and more.

Love is indeed a powerful emotion.