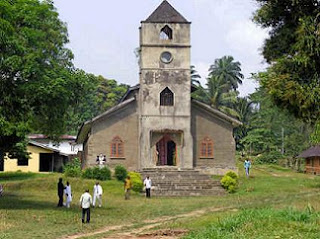 They were reportedly shot dead by the police while trying to escape from detention.
The third suspect who was the informant to the robbers is currently in police custody for further interrogation.

Sources had it that the suspect (name withheld), is a close confidant of the Bishop Court and has been an adopted son by the Bishop, Rt. Rev. Jolly Oyekpen and his family.
He was alleged to have informed his other two partners in crime about the N954,000 in the Bishop’s Court which it was gathered, was money from church services yet to be paid to the church’s bank account.

The robbers reportedly stormed the church premises in the early hours of last Thursday and snatch the money and some other valuables, including mobile phones.

Police investigations led to the arrest of the suspect, who was said to have admitted to have committed the crime by giving information about the money to his dead friends.

It was further learnt that the two dead suspects reportedly met their waterloo in Ikphesi, a neighbouring community to Igarra.

The police offered them a bait through the principal suspect to “come for another deal of N2 million.”
On arrival, they were said to have sensed danger and wanted to escape when the police opened fire on them. One was said to have died on the spot while the other died later.

The principal suspect was said to confessed that his share of the loot was N300,000 and out of which he spent N20,000 before he was arrested. He was said to have been planning his marriage later in the year.

A senior police officer at the Igarra Police Station who confirmed the report, said the case has been transferred to the State Criminal Investigation Department (SCID) in Benin City.