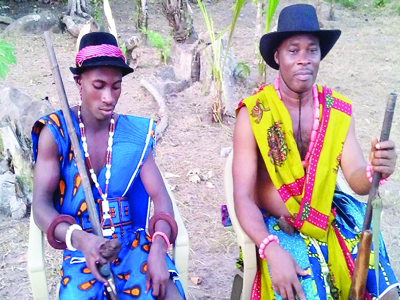 In the olden days, adult circumcision was a practice every household in Ezza Community of Ebonyi State was proud to participate in. It was somewhat a status symbol for whoever had gone through the initiation rites. It also makes he that had been initiated be regarded as a fulfilled man. Contrarily, those unable to perform the rite were seen as efulefu (good-for-nothing or layabout). That was when men were said to be men.

Every family endeavours to ensure that every of its male child underwent the initiation.

Unfortunately, this tradition was abandoned owing to misconceptions that it is not in conformity with Christianity and modernism as the last ceremony took place 20 years ago.

However, 20 years after the last adult was “circumcised”, the Ishinkwo Community in Ebonyi State has revived the dying custom.

It held the traditional circumcision for its men (ibiugwu in Ezza dialect), which is a ceremony marking the transition of the persons observing it from youth to adulthood.

It is the beginning of independence from parental restrictions and accommodation, and indicates that a man is ripe to live in his own home, take a wife or wives and have a family.

In traditional Ezza society, boys and girls of marriage age were not permitted to marry until they had gone through the ceremony.

It used to be a thing of pride for one to go through the initiation when one’s parents were still alive.

The celebrator was to do no work during the month-long event, but stay indoors and eat sumptuous meals, especially pounded yam with egusi soup washed down with fresh palm wine.

The man is usually dressed in a wrapper, bowler hat with beads and neck chain (iyagba) to match, accompanied by a chaperon. The celebrator entertains his numerous visitors and well-wishers with a local guitar (ibekwe).

As a new warrior in town, the man also needs a gun as a symbol of his readiness to defend his household and the community against external aggression or threat from enemies.

The event then ends with the celebrators making public appearance at the Eke Market Square, with spectators admiring and appreciating them with gifts. Elders prayed for and blessed them and their future.

However, the custom was abandoned for years and subsequently went into oblivion.