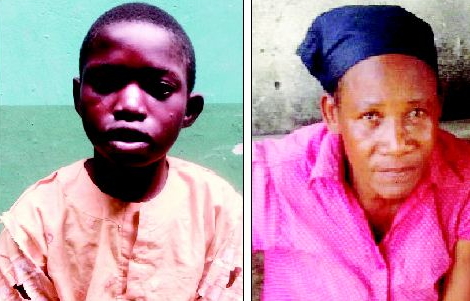 A trader simply identified as Mama Sarah has been accused of maltreating a boy in her custody.

12-year-old Michael Maduagu, a victim of domestic violence, was allegedly “severely assaulted” by his guardian.

We learnt that Mama Sarah, a cleaner with Nigerian Naval Dockyard, usually descends on the boy.

She beat up the boy last Sunday, placed a hot iron on his leg and made incisions on his body with a blade.

The boy, a primary one pupil at Bonny Camp Primary School, was brought from Anambra State when he was barely five. 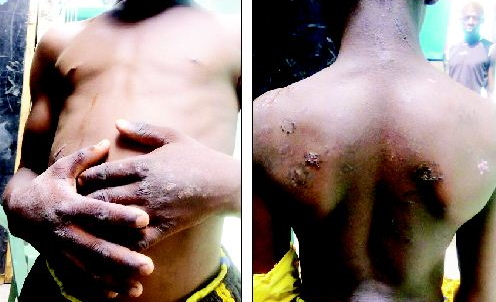 Mama Sarah’s fellow traders at Bar Beach Bus Stop on Victoria Island yesterday accused her of inhuman treatment of the boy, urging government to prosecute her.

Musbau Agbodemu, Executive Director of Rural and Urban Development Initiative (RUDI), a pressure group, said the matter was first reported to his Ebute Meta, Lagos office on Tuesday by a trader.

He said the Ministry of Woman Affairs and Poverty Alleviation officials have intervened in the matter, adding: “The boy is now in their custody. When he was brought to our office, he wasn’t in a good state. His body is full of scars and bruises. He couldn’t talk much because of fear. I learnt she brought him to Lagos with the pretext of taking care of him after his father’s death. I just pray this matter will be treated with utmost urgency because she was summoned on Wednesday.”

Agbodemu, who operates a welfare centre, quoted the victim as saying that he was more pained when his guardian didn’t allow him to attend his school’s end-of-the-year concert. He said it was during vacation that she asked him to go to school but he returned home when he found no one.

Mama Sarah’s fellow traders did not hide their feelings on the matter.

Buchi said since Mama Sarah was summoned on Wednesday, she has been acting weird, adding that she has been planning to run away with her daughter.

“I moved to Bar Beach six years ago and I got to know Mama Sarah through Michael. He was always sad. I mostly saw him on the expressway selling fuel. Things I cannot lift, Michael will lift it. There was a time I bought him food; I couldn’t believe my eyes when I saw the woman eating the food. The boy once pleaded with me to take him home but I couldn’t because I didn’t want to be accused of kidnapping. So, I asked him to report his guardian to Bar Beach Police Station but they didn’t take his matter serious. Most times she accuses him of stealing but I know he is not a thief. There was a day Sarah, her daughter, beat him with a stick. It was when I couldn’t continue to see the boy suffer I took him to RUDI.”

Celestial said: “There is nothing she cannot use to beat him. At times, she used naked wire, hot knife and put grinded pepper on his wound. She is that mean. I personally went to her place of work to report to her boss. I don’t know the reason they haven’t come to pick her. Is it until she escapes? I think she also needs to be tortured to know how it feels,” she said.

A resident, Destiny Francis, said she had contact with the woman two years ago when she was sent out of the police barracks because of Michael.

She said: “I was shocked when I heard that she uses hot knife on boy’s legs. Three of her own children left her when her trouble was too much. It is just her last born that lives with her and that one is something else. She sometimes beat her mother. I want justice to prevail.”