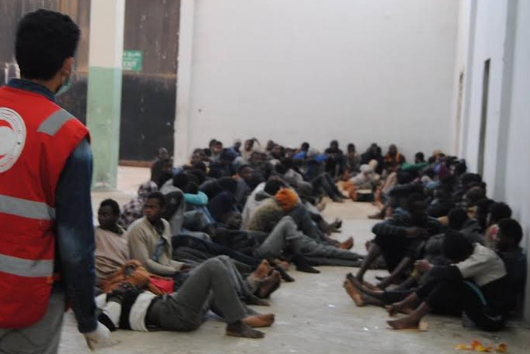 January 24, 2017 – Nigerian Migrants Warned Against Travelling To Libya Over Leaked Video Of African Migrants Being Executed

The FG has disclosed that no fewer than 2,000 Nigerians were evacuated from Libya in the last two months following the emergence of videos and photographs of Nigerians being killed in the North African country.

Senior Special Assistant to the President on Foreign Affairs and Diaspora, Abike Dabiri-Erewa, who confirmed this in a statement yesterday, warned Nigerian migrants against travelling to Libya illegally, saying “the penalty, when caught, is death.”

“The attention of the office of the Senior Special Assistant to the President on Foreign Affairs and Diaspora has been drawn to a video and pictures being circulated on the purported killing of black immigrants in Libya,” she said.

“While the authenticity of the pictures and tapes in question cannot be verified, it is a known fact that Libya has been executing alleged black illegal immigrants for years.

“As the Chairman of the Committee on Diaspora in the House of Representatives in the Seventh Assembly, we intervened in the case of 24 Nigerians about to be killed in Libya,” Dabiri-Erewa added in the statement. She said the committee, in collaboration with Socio-Economic Rights and Accountability Project (SERAP), a non-governmental organisation (NGO), petitioned the UN, AU and ECOWAS, prompting the then Libyan leader, late Muammar Ghadaffi to yield to pressure and released them.

“As at two months ago, National Emergency Management Agency (NEMA), alongside the Nigerian Embassy in Libya, evacuated over 2,000 Nigerians from Libya,” she said.

“The Nigerian Embassy in Libya, working with NEMA, has relentlessly intervened in cases involving Nigerians in Libya and will continue to do so.

“Libyans are dealing with challenges as there is no recognised government in place.

“The office of the Senior Special Assistant to the President on Foreign Affairs and Diaspora, hereby, appeals again to Nigerian migrants to avoid Libya as penalty for illegal migration to Libya, when caught, is usually a death sentence.”