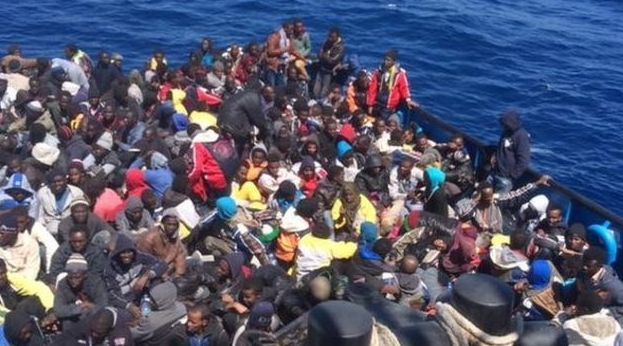 I always feel very bad and sad when the international electronic media show hundreds of Africans drowning in the Mediterranean Sea virtually every day. Those rescued claim they are running away from undemocratic governments, female circumcision, also known as genital mutilation, ethnic cleansing and religious conflicts.

The truth is that most of them are running away from poverty, unemployment, frustration and uncertain future arising from insensitive governments characterized by lack of serious planning. In other words, these people are economic migrants rather than being political refugees. The case can of course be made that economic deprivation is almost as bad as political and religious persecution. Both can lead to death and their separation is merely academic.

To keep young Africans at home, one must provide them means of economic sustenance. The west therefore has self-interest in not colluding with African countries’ leaders to rob their people and they must also seriously engage Africa in fair trade rather than the ripping them off as they presently do. African produce and raw materials are bought cheaply and are returned to them as finished products and are sold at many times the cost of production.

Foreigners dictate the price they buy African goods and also the price their goods are sold to Africans. Africa has no choice in this and this unfair exchange is also a manifestation of Africa’s weakness in global power relations .This is what is at the root of the present modern slave trade going on in Africa.

The trans-Atlantic slave trade which lasted for almost five centuries and which has gone down into history as forced migrations which according to my friend and colleague, Professor Joseph Inikori of Rochester University in the USA, involved the transplantation of not less than 15million hapless Africans to the Americas, that is South and North America.

Most of these people came from Portuguese Angola which according to Basil Davidson was reduced to a “howling wilderness” almost denuded of its people after five centuries of the Portuguese ferrying their black cargoes across the Atlantic. The area between the Bights of Benin and Biafra known then as the slave coast approximates most of the Nigerian coast provided the rest of these black cargoes of involuntary migration to the new world.

It is an irony that the growing and cultivation of something so sweet as sugar should have involved so much bitterness and suffering to the victims of slave labour on American and West Indian sugar plantations. Africans largely sold their brothers into slavery even though there is evidence that slave wars were encouraged by the European slavers to facilitate ample supply of slaves to the slave ships anchored in slave ports of Luanda, Lobito, Escravos, Warri, Lagos, Porto Novo, Accra, Saint Louis and others.

Most of those shipped across the Atlantic were forced into it. African potentates, middlemen and merchants colluded with European slave traders to remove the young and productive young men and women from West Africa where trade was concentrated. This trade constituted the basis of western capitalism which enjoyed centuries of free and unpaid labour according to Eric Williams in his 1947 Oxford Ph.D. thesis which became a classic entitled “Capitalism and slavery” subsequently.

But today, most of those running away are young people. In the past, they were people with little education or no education at all. Now those leaving are sometimes graduates of tertiary institutions who cannot find jobs. They are also using all kinds of routes legal and illegal and sometimes very dangerous roads such as crossing the Sahara desert and the Mediterranean Sea. While this voluntary movement of people is going on, there is the odious human trafficking where young people particularly girls are lured into the sex trade. Some of the young girls claim that their traducers promise them good jobs in Europe only to be dumped in brothels in Libya and Europe.

There are those young girls who knew that what they were entering into right from beginning was prostitution. It is very sad that some parents aid and abet the trafficking of their children. Some parents even sell their old homes to finance their children’s movement. There were cases where parents did this horrible thing and when challenged they claimed they did it to assist their children to get out of poverty. There are instances of some of such children after a few years sending money home from their earnings from this nefarious trade to fund their parents businesses. In cases of involuntary trafficking, the victims of the trade are sworn to oaths in juju shrines to keep their mouths shut if they are caught.

They also sometimes swear allegiance to their captors not to bolt away until they have paid their madams ‘or masters ‘investment in their relocation and placement in brothels in Europe. Sometimes young girls are taken from Nigeria not to Europe but to brothels in poor wretched countries such as Mali and Burkina Faso in West Africa where they endure worse situation than what is prevalent at home more or less jumping from fry pan into fire.

The ones taken to Libya when Muamar Ghadafi was in power fared better but immediately after he was murdered, all hell broke out and they became shooting targets for wild armed gangs in the country fighting for political turf. This horrible situation is what is fuelling the desperate movement to Europe occasioning drowning in the Mediterranean Sea. But in spite of this terrible ordeal the movement across the Sahara continues.

The inhumanity of this trafficking ought to catch the attention of leaders of African states and to lead perhaps to summoning of an extraordinary summit of the African Union or other regional bodies like ECOWAS or SADCC to tackle this shame and degrading horror. It is not just an African problem because people are coming from Bangladesh, Pakistan Afghanistan, Iraq, Syria and Yemen where wars are raging. The preponderant numbers in recent times are coming from Africa. Finding a solution to this problem is urgent because of its lasting effect on Africans and people of African descent.

Racism is one of the residual effects of the trans-Atlantic slave trade where the justification of the trade was premised on the grounds that Africans were not really human and that enslaving them was freeing them from the barbarism of their African savage existence. It has taken centuries for Africans to partially shed this degrading and odious racism. The present, somehow voluntary, slave trade Africans are imposing on themselves will in future reinforce the belief of those like Rudyard Kipling who felt that Africans are “half children, half devils “and not really people.

We can thus see that it is in the interest of black humanity to so run the affairs of our countries that our children will have a future in our countries. I still remember my college days in Europe, America and Canada when Chinese were looked down upon as “china man” something derogatory like “nigger” and laughed at. But by their foot straps, the Chinese by fire and by force have pulled themselves into global reckoning. Nobody is laughing at the Chinese today. This was also the case with the Japanese. In London of the 1950s and 1960s, one could encounter advertisements for vacant apartments with the proviso “No Irish, no coloured (blacks) but Jap. Ok”.

If we want to be respected, we must pull ourselves up, develop our countries and stop escaping to Europe and America and Canada in search of the Golden Fleece. There is enough opportunity at home if we look inwards. We have to mobilize our human and material resources to develop our countries .We have to put an end to stealing and looting our nations’ treasuries and stop colluding with the outside world to ruin ourselves. Unless we do this, we will always have a weak hand in dealing with the rest of the world. For us, as Nigerians, the time to get moving is now.

The developed world will soon move away from reliance on hydrocarbons as a source of energy. Technology is going to render useless very soon what we depend on for foreign reserve. The way to go is industrialization, technological innovation and adding value to our agricultural produce. The days of relying on export of mineral and agricultural raw materials will soon be gone forever.

The urgency of the situation needs to be understood by everyone so that instead of wasting our time on useless political disputation and our vast resources on importing cheap goods from Asian countries, we should settle down and seriously plan for the future of which this deplorable but salvageable present is part of.