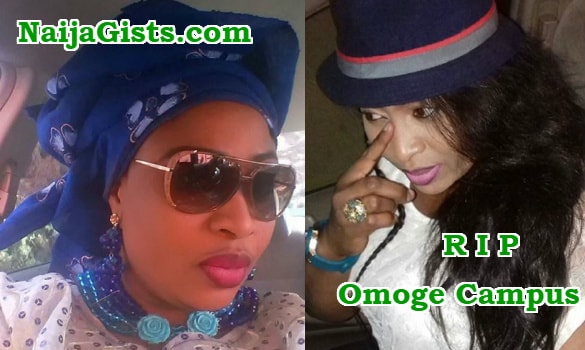 As Nollywood is getting ready to remember Moji Olaiya who died in Canada about a year ago, the entertainment industry has been thrown into mourning again following the death of popular Yoruba actress, Aisha Abimbola.

The actress who battled breast cancer silently for while gave up the ghost in a Canadian hospital last night.

The news which first leaked from her colleague, Bisola Badmus on Instagram this morning has since reached all entertainers in the country.

In his own tribute, actor, Yomi Fabiyi, shared a picture of the late actress along with tears emojis and the caption: “Unquestionable God.”

On his own, Odunlade Adekola posted a picture of the actress on Instagram with the words: Omg so sad” while Ronke Odusanya wrote: “STILL IN SHOCK ……RIP @omogecampus1.”

“May God forgive all your sins Aunty Aisha. #NoMoreOmogeCampus#tearsuncontrolable#GodPleasehaveCompasion#LetTHISstop#”

For his own tribute, veteran actor Adebayo Salami wrote:

“My thoughts and prayers are with the family of Abimbola in this sober period.”

“May God bless her soul and grant us the fortitude to bear this sad loss. Amin”

Veteran actor Jide Kosoko who is still in shock wrote:

Here is how Sola Kosoko Abiona mourned the deceased thus;

“I’m deeply shocked when I heard the sudden death of you ah! Oga ooOo, God knows the best”.

Meanwhile, our source on ground in Canada said an autopsy is being conducted on late Aisha Abimbola’s body as her family members just landed in Toronto to speed up the repatriation of her remains.

When asked if her family members are considering burying her in Canada, the source said they are still deliberating on it.

May God comfort all those affected by her sudden death.