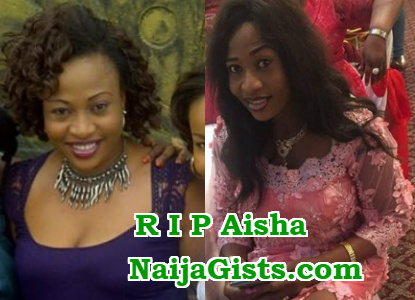 The actress lost her battle to breast cancer in Canada last night.

Her death is painful in that she left behind a lot of fun memories.

A source close to the deceased told NaijaGists.com few minutes ago that the actress went through a lot of pain in the last 3 days of her life on earth.

At a point, the actress reportedly considered assisted suicide when the pain became unbearable which was not granted until she passed on around 10:25pm last night.

The source said Aisha left behind two young children and not one as we earlier reported.

May God comfort her loved ones.