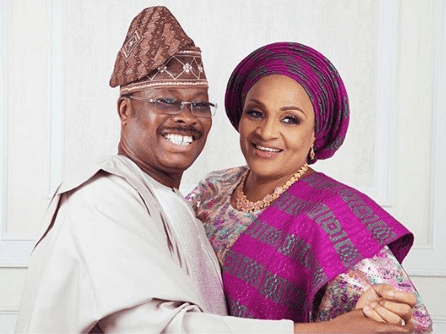 “Abiola Ajimobi Cheated On Me Twice”- Wife, Florence Ajimobi Opens Can Of Worms

The wife of former Governor Abiola Ajimobi of Oyo State has said she caught her husband having an affair on two occasions.

Florence Ajimobi said this while speaking with her daughter, Bisola in a video which was posted on Instagram.

According to Florence, when most men cheat, it is just about sex and nothing more.

“Even on one or two occasions that I caught him cheating, he will apologise and once he apologises and it ends, I never go back to them (the issues) again. I never, Bisola because what I’m saying is to err is human, to forgive is divine.

“We are friends. Even as a wife, sometimes I fall below his expectations. Sometimes we do something worse than cheating.”

When asked what could be worse than having an affair, Mrs. Ajiombi responded;

“There are some women that build houses without their husbands knowing. It is as bad. Why would you do such a thing without telling him? So, there are different things we do. It is not only cheating that is bad in a relationship.”

Florence, who is a grandmother, said as a wife, she also offends her husband and sometimes does not have the courage to see him in person.

The former Oyo first lady said if a husband is caught having an affair, the wife should forgive and not overreact.

“Most men when they cheat they just have sex with the woman but when a man is having relations with a woman he loves, he is making love, it is not about sex. So, if you are cheap enough, give yourself to my husband, he is mine. He will never go away. He will come back. You are eating left over because I have eaten the better part of him.”

Mrs. Ajimobi said it was not reasonable to divorce a man just for cheating, adding that violence should be the only reason for separation.

“The point I will opt for divorce is when it becomes violent. And I cannot take that. But I don’t buy divorce because I look at my background… My mother never married my father. I was born out of wedlock. I grew up with my mum and stepfather. It is not the best for any child.

“So, even before I got married, I made up my mind that this union called married would be forever.”

“Sometimes I know I have said horrible things to my husband and I see the look on his face. Before it goes further, I just lock myself in the toilet and he would ask me to come out and I will make him promise me that he will not touch me before I come out.

“You tell a man some horrible things and they get angry and worked up. So, I want us to learn from that and learn what we say because an angry man cannot control himself. Neither can an angry woman control her words

“So, sometimes we provoke the men to that level but when you know you’ve done it, don’t let any man beat you. Don’t allow it.”

Continue Reading
You may also like...
Related Topics:ajimobi cheated on wife