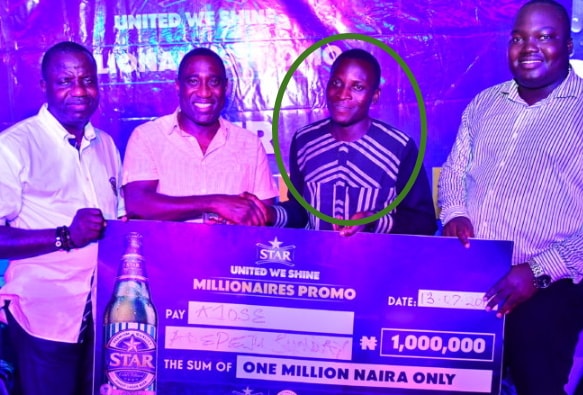 Meet Ajose Adepeju, the latest winner of the  N1m in the Star United We Shine Millionaires Promo.

The 31-year-old technician narrated what happened on the day he won the promo.

Here is what delighted Adepeju said as he marvels about his fortune:

“I usually enjoy my Star Lager when I drink with my colleagues. On that fateful day, I was at a bar with my friends where the bartender served our table. I had only heard of the promo by the bartender who told me not to throw my crown cork away few minutes before.”

“My friend told me that I would win; I laughed and I said ‘Oluwa se’, then I checked my crown cork and you know the rest. I immediately called my wife who initially doubted the credibility until the Star people called me. When I got the call, I was so excited. Star really surprised me with this one. I don’t think it’s an overestimation to say I was in luck that day. I mean I had just heard of the promo but I didn’t think I would win that easily.

“As you can see now, I’m even still in shock. You see these things on social media and on TV but you never think it’ll happen to you till it does. I’m really grateful to Star for this life changing experience.I already have plans for what I will do with the money and I can’t wait to take advantage of this cash prize and explore some investment opportunities.”

Millionares will be awarded their prizes weekly.

To join the promo, consumers who are above 18 years are to look under the crown cork of the Star Lager Beer Super Eagles Special edition.