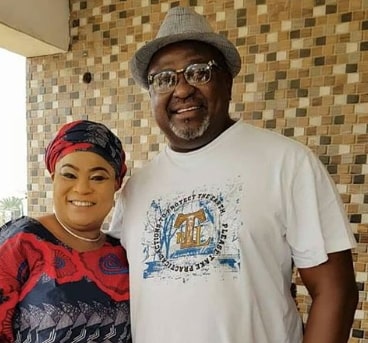 In this recent chat with Punch reporter, Joy Marcus, Nollywood actor Akin Lewis talks about his failed marriage and how he met his 3rd wife. He also discusses other issues of concern.

How would you describe your journey into the movie industry?

My journey into the industry was rough because my parents did not want me to go into acting but I still went ahead. I worked very hard for six years before I started being noticed. It was a journey full of twists and turns until I became very popular.

At what point did you discover your path in acting?

I started out very early by partaking in school plays while I was in primary school. When I got into secondary school, I became a member of the literary and debating society. I liked acting and expressing myself as a child.

Who gave you the first opportunity in your career?

I was given my first opportunity by Prof Bode Showande of the University of Ibadan. We had a group and the name of the group was Vilete Vision but I cannot remember the name of the first movie I acted in because it is such a long time. It was a television series and I can’t remember how much I was paid but I think the money was put back into the group. However, I was brought into stardom by acting in television series. I was in a comedy series titled Why Worry? It was a popular series in the eighties and nineties. Koko Close was also a popular TV series that got its audience glued to their TV sets.

What were some of the challenges you faced in the early years of your career?

There were a lot of challenges but I overcame them. Drama itself is tough but I studied it in school; so, I leveraged on the knowledge I had. There were also lots of great actors in the industry but I worked hard and God’s grace was there for me.

Why do you usually act as a rich man in movies?

If you see me in person, you will see that I look rich and I am also rich. Maybe that is why I always get the part of a rich man. However, I can act any role though I’m mostly asked to play characters that are rich. I have also acted the part of a poor man because I am one of the most highly trained actors in this country.

What are some of the things people don’t know about you?

What people don’t know about me, they will never know. I am afraid of heights; it is very bad for me. I still get worried and shiver each time I am about to fly but I still fly anyway. But it is always difficult for me.

Do you believe there is discrimination between the Igbo and Yoruba in Nollywood?

In Nigeria, there is discrimination everywhere. We need to grow up, be more responsible and put away negativity. I speak about six to seven international languages and I will have you know that language is just a tool that we use in acting. Acting is universal; so, I don’t think that the Yoruba or Igbo movie is different. It is just the tool that it is being expressed with that is different.

What are some of the challenges you face in the movie industry?

A long time ago, there were no funds in the movie industry. Right now, there are a lot of incompetent actors – people who don’t know their right from their left. However, I believe that with time, there will be improvement in the industry.

If you were not an actor, what would you be doing?

I would be an ambassador somewhere in the Diaspora or a Senior Advocate of Nigeria.

Do you have any regrets as an actor?

No, but there are times when I feel like doing something new. But I have never had regrets being an actor.

Being a handsome man, do you get advances from the opposite sex?

Yes; I get advances everywhere. I respect women a lot and they are a very large core of my fan base. I manage their advances wisely.

What is your view on the increase of divorce and separation among celebrity couples?

That is always the problem. So many marriages are breaking up every day and it is not just peculiar to celebrities alone. I think the churches and mosques have to do something about that. They have to look at their code of conduct and teaching so that they will educate intending couples on marriage. The religious houses shouldn’t shy away from the problem. They should think of ways to save more marriages from breaking up.

What is your take on divorce?

According to the Bible, nobody should divorce his wife except for the reason that was stated. But in the world of today, if a partner says he or she is tired and can’t continue with the relationship, there is nothing the other partner can do about it. In a case like that, you won’t have a choice but to leave them alone.

Considering that you are in your third marriage, don’t you feel that people will look at you as an unserious person?

People will look at you anyhow and say different things but I don’t care. If I have to stop, listen and react to everything that people say about me, then I won’t be anything in this world. There are reasons for everything that happens; so, I thank God. People will always abuse anything even if it is a dead tree. I know myself.

Despite having two failed marriages, what kept your belief in love?

Accept it or not, I believe in the marriage institution and I wasn’t the one that walked out of the marriages because the women didn’t behave well. Also, I believe in love; that is why I looked for a third wife. We met through friends and that was how it all started.

How did you capture her heart?

I am a lady’s man and I am very handsome. I gave her the ‘Yoruba angel’ style. She already had a crush on me; so, that made it easy for me to sweep her off her feet.

What is the best gift you have given to her?

That will be getting married to her; that’s what she told me. It wasn’t love at first sight because I had the opportunity to truly watch her well before making a move.

What was her reaction when you asked her to marry you?

She ran away. She was scared but we talked about it later. So, all her fears and worries disappeared.

How do you deal with controversies?

I don’t get into controversies. I will rather keep quiet than get into an unnecessary argument. But that doesn’t mean you should get into my space because if you do, I will give you a piece of my mind.

What are your aspirations?

I want to keep growing stronger because I am at the top of my career. I pray that God allows me to continue to remain relevant. Everyone wants to be at the top.

I had my elementary education in Ibadan. Then, I studied Dramatic Arts at the University of Ife (now Obafemi Awolowo University), Ile-Ife, Osun State. I also travelled abroad to further my study in dramatic arts, acting and directing.