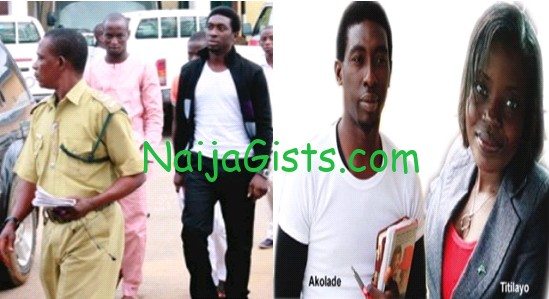 The murder trial of the 31-year-old Akolade Arowolo, who allegedly killed his banker-wife, Titilayo,at their Isolo residence in Lagos reopened again on Monday November 19 before Justice Lateefah Okunnu of an Ikeja High Court. In court as a prosecution witness was Kingsley Ehebha, a fraud analyst from MTN Nigeria.

Titilayo’s sister, Ijeh Oyakhire, and her father, George, were also among the witnesses who testified during prosecution.

Monday’s trial saw the Director of Public Prosecutions for Lagos State, Mrs. Olabisi Ogungbesan, closed closing her argument with the 16th witness, Ehebha. Attempts by Ogungbesan to tender Akolade’s call logs between June 1 and July 26, 2011 and a covering note from MTN as evidence were, however, opposed by Akolade’s lawyer, Olanrewaju Ajanaku.

According to Ajanaku, the call logs as it is contained in the document were totally blurred and not legible. Ruling on the application, Okunnu
overruled Ajanaku’s objection and admitted the MTN covering letter and
the call logs as exhibit P65 and P66 respectively.

Your Lordship said: “The document in question is legible and very clear, though it is tiny. The two documents also substantially complied with the Evidence Act as the person who generated them in the normal course of duty is in court and has identified them.”

While being led in evidence by Ogungbesan, Ehebha who said he joined MTN in 2004 before being promoted to the position of analyst in 2010 explained that the owner of the phone (Akolade)with number 08034460*** was indeed within Oshodi/Isolo area on the day Titilayo was killed. Hear him:

“I generated the call logs through an automated system based on oracle software application and it shows the time calls were being made and the terminating and originating city of the calls. On June 24, 2011, the owner of the telephone received five calls. He recharged the phone at 7:58am,received a text message at 12:55 pm. The last voice call he received was at 11:11am and the terminating area was Oshodi/Isolo axis.”

Under cross-examination by defence counsel, Ajanaku demanded to know from Ehebha if the system from which the call logs were extracted had not been sabotaged or broken down to exclude some other calls made through to the line. Ehebha said in reply:

“All our system are audited and our system does not crash because we have backs ups. When system A is down, system B goes into operation. So every call made to the line are always captured with the exception of missed calls.” After the re-examination, Ogungbesan closed the case for prosecution while the case has been adjourned till November 29 for the defence to open their case, having informed the court that they have five witnesses.

It would be recalled that Akolade was first arraigned before Justice Okunnu on December 21, 2011, on one count of murder. BLB will bring the details of the sitting at the next adjourned date. (Source)