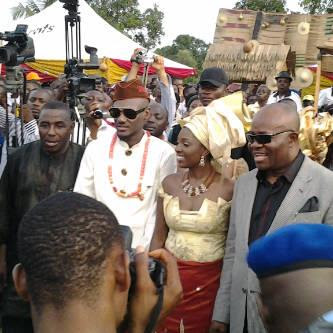 Friday’s presentation of two SUVs to Nigerian hip pop star, 2face Idibia, and wife, Annie Macaulay, by Akwa Ibom State governor, Godswill Akpabio, at their traditional wedding, has got a lot of Nigerians railing at the profligacy  of public officials.

Mr. Akpabio had stunned guests that thronged the Apostolic High School, Esit Urua Community venue, along Eket-Ibeno Road, for the traditional wedding of the celerity couple with the announcement of a donation of two brand new Toyota Prado SUVs to them.

The lucky couple are also to travel in the luxury of the company of 29 delegates from Akwa Ibom to the United Arab Emirate, UAE, courtesy of the governor, who also promised to throw the state’s treasury open to bankroll an all-expense paid trip for the white wedding scheduled for March 23 in Dubai.

The Eket-Ibeno Road, which has remained in a bad state for a long time, is to be fully rehabilitated before the next child dedication ceremony of the couple, the governor said.

Although a couple of loyalists commended the governor, commonly derisively called “the uncommon transformer” in the state, for his reckless spending of state funds, a cross-section of other Nigerians have described the gesture as “misplaced priority”, “wasteful” and “abuse of public trust” in the management of state resources.

The state Commissioner for Information, Aniekan Umanah, did not respond to calls and text messages by PREMIUM TIMES for official explanation regarding why the governor made the extravagant gesture in a state where salaries to civil servants are known to be consistently irregular.

A supporter of the governor, Egondu Okorie, was excited about the governor’s gesture, expressing disappointment in his Facebook page at those he said were making “shallow minded comments”, which he noted would not happen in civilized societies.

Another supporter, Ikazoboh Victor, blamed poverty for the comments by some of the governor’s critics, who condemned the donation, saying that “there is no big deal about just two SUVs as wedding gift”.
A self-serving ego trip

But not everybody is impressed, with some describing the gifts as outrageous.

“This is absolute rubbish”, an apparently angry Mary Udom said. “These (Tuface and wife) are no poor people. I don’t see why Akpabio is doing such a thing. If it were an ordinary man’s wedding, he (Akpabio) won’t even send a gift, talkless of giving cars.”

For Obo Effanga, Governance Manager, Action Aid Nigeria, the governor’s action is embarrassing, as it defeats the purpose for good governance, particularly in the allocation of resources.

“This is very embarrassing indeed! If governance is about being in a position to take decisions in the interest of the people of the state, when a governor allocates public resources to individuals because of their closeness to him, how does this enhance that purpose and the interest of the ordinary citizens in the state, on whose behalf the governor claimed he was making the donation?,” Mr Effanga said.

“If the governor was doing this with his personal resources, which is very doubtful, nobody would be complaining. As if that is not enough, the state is going to bear the cost of 29 officials travelling to Dubai for the wedding.

“This amount could have been enough to do something more useful to the society. It could buy several volumes of books for University of Uyo that has been crying of funding challenges. That amount could sponsor a lot drugs that could be dispensed to citizens free,” he added.

Spokesman for the Congress for Progressive Change, CPC, Rotimi Fashakin, said it is such profligate and reckless spending of available resources at their disposal by governors from the Niger Delta region that has made the Petroleum Industry Bill, PIB, to suffer a long delay at the National Assembly till today.

According to Mr. Fashakin, if it were his personal resources, Mr. Akpabio would not do what he did, but having realised that Akwa Ibom earns a lot, based on 13 percent derivation, he could afford to spend on anything that catches his fancies.

He said, “This type of financial recklessness from governors of oil rich states is another reason militating against the passage of the PIB. The 10 per cent being proposed for the host communities is seen as superfluous if this type of unimaginable imprudence becomes second nature for some of these governors. This type of anti-people expenditure is only symptomatic of a leader that emerged through the subversion of the people’s will and desire.”
For Tope Fasua, an Abuja-based public affairs commentator, such behaviours are clearly as a result of lack of vision by our leaders.

“The Bible says the people perish for lack of vision and knowledge. Akpabio lacks vision, because he is on an ego trip. He thinks he has arrived. But, the truth is that despite the huge oil money that goes to the state every month, the rate of poverty still affects 80 per cent of the population.

“Nobody is thinking about the fact that the price of oil could crash. That is what economists call the tragic choice in Akpabio’s behaviour. All that would unravel soon.”

A return ticket, Lagos-Dubai-Lagos, on Emirates flight is about $806 (about N126,542.00) for one person; and when multiplied by at least 35 people, made up of the 29 delegates, the couple and their parents, or representatives, the total cost for tickets and other protocol arrangements, like visa application fees, would be about N5million.

It is not clear if the governor would prefer a chartered flight arrangement or the use of his private jet to guarantee executive comfort for the delegation.

To take care of the transport and accommodation of the delegation, it is not also clear if the protocol arrangement would opt for an Executive Limousine option and a top of the range hospitality arrangement befitting the status of a pop star by going for a $2,000 per room per night lodging in a five-star hotel, which might cost about $300,000 (about N47 million) for at least a four-day stay.

Other exigencies, including at least $3,000 for each delegate as estacode ($105,000), about N16.5million, and other bookings for the wedding proper and reception, would gulp about N10million.

Conservative estimates show that by the time the couple returns to Nigeria at the end of the trip to Dubai, a minimum of N100million, including the cost of the two SUVs, would have gone from the state treasury for the project.

For Mr. Effanga, a donation of N100million to the University of Uyo would have gone a long way in relieving the university l of its funding constraint, which Vice Chancellor Comfort Ekpo, told the visiting Senate Committee on Education last week is affecting the development of the institution.

“If the amount to be spent on the ego trip to Dubai were to be invested in the provision of books to school libraries, medical facilities in hospitals or boreholes to communities in the state, including the musician’s new wife’s village, many citizens would derive more utilitarian value from the expenditure,” the activist noted.