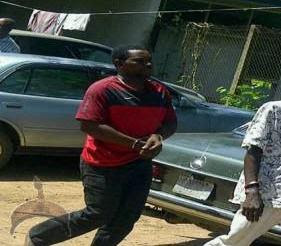 Alleged gay hotelier and socialite, Tunji Alaaso has been murdered in cold blood by unknown assailants.
Alaaso who is well known for series of criminal activities in Kollington, Alagbado area of Lagos, southwest Nigeria, was allegedly killed this morning, Monday, 20 July, 2015.
The deceased was said to have been stabbed to death in his car while on his way home around Moshalasi bus stop, Alagbado.

Until his death, he was a very powerful man who was feared by all.
Some of his notorious activities include using faking policemen and EFCC officials to swindle unsuspecting victims of their hard earned money and property.

His boys are said to have hit the streets vowing that they will bring down the killers of their boss.
Meanwhile soldiers have been deployed to his two hotels to forestall breakdown of law by his aggrieved supporters.

It would be recalled that the police in Area ‘G’, Ogba, declared Alaaso, who until his death, resided at 7, Barusam Avenue, Alagbado, Lagos, wanted for allegedly sexually assaulting an 18-year old boy.
PM News gathered that Alaaso sexually assaulted the teenager, Kabiru Amusa, at his residence, on Friday, 16 January.

Narrating his ordeal to the police, the victim, a petrol attendant working at Ayokunnu Petrol Station, Abule-Taylor, near Abule-Egba, said Alaaso has been luring him to his house for a long time, promising to get him a more lucrative job.

He said after a long persuasion, he decided to honour his invitation, only for the man to drug him with the assistance of some men believed to be homosexuals.

Kabiru told the police that he was drugged with Don Simon drink and that the man locked him up and had marathon sex with him through the anus, leading to tears and bleeding.

We further gathered that after the dastardly act, Alaaso released the teenager, who, afraid for his life, refused to tell his parents what transpired.
“But when I could not defecate for four days and I was feeling very uncomfortable, I had to tell my father, who immediately brought me to Area ‘G’ to report the incident,” Kabiru told PM News.

The police immediately swung into action and swooped on the suspect’s building. On sighting the police, Alaaso reportedly escaped through the roof of his house and has since been at large.
His suspected co-conspirators are Wahab Adeniyi, 39; Gbenga Aladelusi, 32; Okoro Emeka, 21; Hastrup

Adesoji, 24; Gbenga Odumolu, 23; Azeez Amusa, 45 and a lady who prevented the police from arresting him, Mrs. Yetunde Adelugba, 38.

While the police has declared the prime suspect wanted, the co-conspirators were charged before the Ikeja Magistrate’s Court 8, for conspiracy and indecent sexual assault on a male.
The seven suspects were remanded at the Kirikiri maximum prison, pending further hearing on the case.