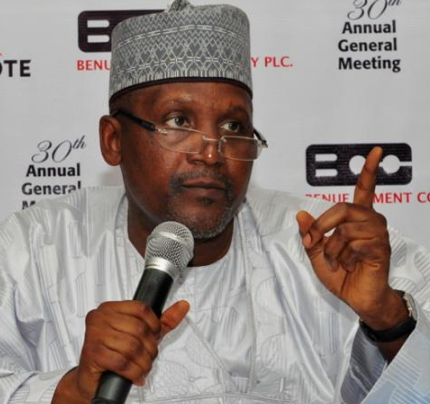 In a rather surprising and shocking manner, highly-placed officials in the Federal Capital Territory Administration (FCTA) rejected donation of food items from the Dangote Foundation meant for the Internally Displaced Persons (IDPs) in Abuja.

The food items were reportedly offered in the spirit of Ramadan.

The foundation reportedly went to the minister’s office to deliver the multi-million naira items such as sugar, salt, spaghetti, rice, Danvita, and wheat meal only for the gifts to be rejected.

All entreaties that the food items were meant for distribution to the needy like the IDPs fell on deaf ears.

The foundation, owned by the richest man in Africa, as part of its mandate to give, especially in the holy month of Ramadan for the indigent and the vulnerable in the society has the tradition of donating money and food materials to the less privileged and victims of other disasters across the country.

Ramadan supplies are delivered to the 36 states, including FCT every year and state governors assign a contact person to receive the items which are delivered in trucks on behalf of the governor before distribution to the identified beneficiaries by the state government.

Some residents of the FCT expressed dismay at the action of highlu-placed officials of the FCTA ministry and wondered how the plight of the IDPs would be addressed during Ramadan as the items were meant for them and no one elsewhere.

Callers at the FCT secretariat at Area 11, it was gathered, were said to be very displeased on hearing of rejection of the food items, which they believe would have made the IDP camp in Abuja and other vulnerable feel the good side of Ramadan.

According to them, the reason behind the rejection of the food items cannot be justified because those in the IDPs camp are hungry and some of them are dying.

A Dangote Foundation source confirmed that as at the time of filing this report, about 31 states had already taken deliveries of their items and some have started the distribution. It was learnt that 106 trucks of food items are on their way to Maiduguri, the Borno State capital in fulfillment of Dangote’s promise to make this Ramadan fulfilling for the IDPs in the states.

The latest donation of food items was coming shortly after the foundation donated N2 billion for the rehabilitation of the IDPs in various camps in Borno State.

The source said Dangote Foundation had in the past supported victims of disasters with monetary and food items donations. Food items were donated to the victims of post 2011 elections in some parts of the North while victims of flood disaster across the country were also helped with various food items and other materials.

According to him, Dangote Foundation also took its charity abroad when in 2015, it donated $1 million to support the government of Nepal to rehabilitate the victims of two devastating earth quakes that ravaged the country that year in quick succession.

The foundation also donated $500, 000 to the government of the Republic of Niger to support victims of meningitis outbreak in the country.

Continue Reading
You may also like...
Related Topics:aliko Dangote, foundation