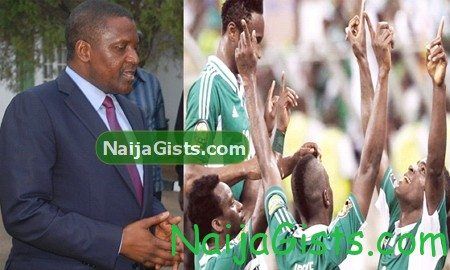 President/Chief Executive of Dangote Group, Aliko Dangote has splashed the sum of N130 million on the Nigerian national team, Super Eagles for reaching the finals of the ongoing 29th Africa Cup of Nations (AFCON) in South Africa.

A statement from Dangote Group explained that the gesture is part of Dangote Group’s corporate social responsibility ( CSR ) to promote and encourage sports development in Nigeria. The donation is to acknowledge the exploits of the national team at the AFCON and stimulate them to bring home the coveted trophy.

Sports minister Mallam Bolaji Abudllahi speaking on the donation said: “Dangote has always demonstrated commitment to Government and people of Nigeria. We are happy over the gesture shown to the players and the coaching crew. It is an example for other well-meaning Nigerians to follow.”

Football enthusiasts are commending Aliko Dangote on the gesture describing it as a necessary tonic that would inspire the Super Eagles to win the final match on Sunday February 10 against the Stallions of Burkina Faso.

Ephraim Ubong, a football lover and Super Eagles supporter believes that the donation would spur the national team to win the trophy. Ubong, a staff of a creative agency in Lagos charged other wealthy Nigerians and organizations to emulate Dangote by donating cash and materials to the national team.

The 2013 Africa Cup of Nations, also known as the Orange Africa Cup of Nations for sponsorship reasons, kicked off from January 19 while the finals will be played on February 10, 2013. The competition is organized by the Confederation of African Football (CAF). Starting from this edition, the tournament was switched to being held in odd-numbered years instead of even-numbered years so that it does not clash with the FIFA World Cup.

The winner of the tournament will qualify for the 2013 FIFA Confederations Cup in Brazil as the representative from CAF.

Dangote, a renowned philanthropist, uses the Dangote Foundation as a vehicle to drive his corporate social responsibility (CSR) initiatives. Each year, he spends hundreds of millions of Naira in donations that add value to the society both within and outside the shores of the Nigeria. The Foundation intervenes in the areas of health, education and empowerment. The Foundation is also involved in providing humanitarian aid to victims of natural disasters.

Dangote Foundation donated $2million in September 2010 to the United Nations World Food Programme (WFP) to help the survivors of the devastating floods in Pakistan. This would be the first time that an individual would make an unsolicited donation to the UNWFP.

Back home in Nigeria, he donated $2.6million on October 5, 2012, to assist flood victims in Kogi State Nigeria, which is one of the heavily impacted states in the flood disaster that affected 23 out of 36 states of the federation in October 2012. He also made a donation of $16million in November 2012, to augment the Nigerian government’s effort to raise funds for the flood victims.

He is a member of the World Economic Forum (WEF) and has sponsored Young Global Leaders (YGLs) from Africa to attend meetings of the WEF. This is informed by his belief that the youth are the future leaders and as such should be nurtured to enable them to play this role.

Through his massive investments across Africa, Dangote has helped to create jobs and improved on living economies. His investment in Sephaku Cement of South Africa, estimated at R779million in 2010, is to date, the largest foreign direct investment by an African company in that country. He has also put Nigeria’s name on the world map as a major manufacturing hub for cement.