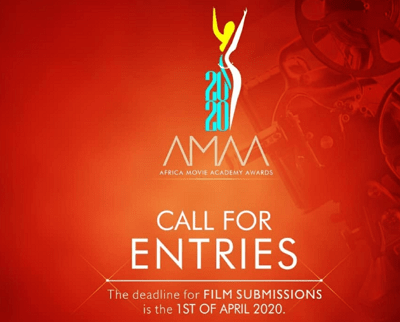 The Africa Movie Academy Awards (AMAA) has opened entries for filmmakers to submit their feature, short, animation and documentary works for consideration in 28 film categories of the awards.

The AMAAs will be held on October 25, 2020 in Lagos and will be televised globally. Only films produced and released between January 2019 and March 2020 may be entered for this celebration of African cinema.

Each completed entry for 2020 entries must be accompanied by all the supporting materials listed on the submission forms, including a synopsis of the film, the list of credits, marketing stills of the film, filmographies of the directors and producers, submissions can be made on https://filmfreeway.com/festival/africamovieacademyawards-882089.

All films must indicate the year of copyright. The Africa Film Academy will not accept any film that exceeds the 120-minute run as a feature or a short film that is longer than 40 minutes.

In 2020 the Africa Film Academy will introduce a special category for Asian Foreign language category.

Founded in 2005, AMAA has mostly held annually in Nigeria, the primary aim of the AMA Awards is to facilitate the development and showcase the social relevance of African cinema from filmmakers across the globe.