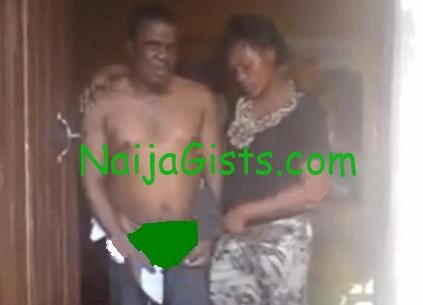 The principal actors in the sex scandal that rocked Edo State-owned Ambrose Alli University (AAU), Ekpoma in July 2010, involving a lecturer of the institution, Dr. Peter Otubu and a female student, Judith Ivie Okosun, have been charged before Magistrate Margaret Iluobe of Ekpoma magistrate’s court.

Dr. Otubu, a Catholic Knight of Saint Mulumba (KSM), was publicly stripped naked in the residence of Judith, a 400-level engineering student on 17 July, 2010 while allegedly attempting to have sex with her in exchange for a pass mark in her carry-over course.

Following this, authorities of AAU, slammed an indefinite suspension on the embattled lecturer for allegedly taking undue advantage of Judith, while she was also suspended by the university which accused her of violating the its matriculation oath.

In addition, Judith was detained for two days by the police at the State Criminal Investigation Department (SCID) while acting on the petition of the lecturer who accused the female student of kidnapping him.

Hearing in the criminal case preferred against the three lecturers and four others began on Wednesday at the Ekpoma Magistrate’s Court.

The accused persons were said to have conspired amongst themselves to commit felony with intent to steal and demand the sum of N500,000 from Engr. (Dr.) Peter Otubu with threat to kill or lynch him if he failed to comply, which made him to issue a cheque of N100,000 in faovur of Judith Ivie Okosun, an offence punishable under sections 516, 406, 390(a) of the criminal code.

The 2nd prosecution witness (PW2), Aruna Abdulwahab testified before Magistrate Margaret Iluobe (Mrs.) of his ordeal in the case.

The accused persons were also alleged to have unlawfully detained Otubu in the apartment of Judith against his will, as well as did record and publish the recorded video clips of the plaintiff (Otubu) on the internet with intent to injure him and exposed him to hatred; an offence punishable under sections 365, 573, 375, 126, 125(a), 355 of the criminal code.

Leading the prosecution, Assistant Legal Director, State Counsel, Anthony Okungbowa Esq and O.P. Ehigiamusoe (Mrs.) told the court it was ready with its witnesses and were prepared to go on.

Testifying, PW2 (Aruna Abdulwahab) a 500 level Accounting student of AAU told the court that on 17 July 2010, he received a phone call from his fiancé urging him to come home.

On getting home, Abdulwahab said he met his fiancé in the next compound with people gathered around the apartment of the 1st accused person (Judith).

He explained that he saw the plaintiff (Otubu) stripped naked in Judith’s apartment, as she dragged him within her room and made calls across to people to come that the plaintiff was in her possession.