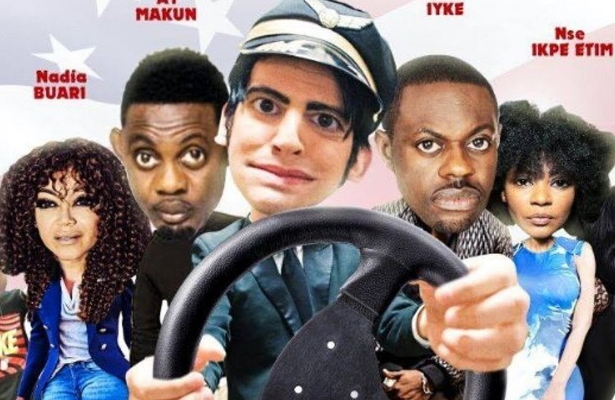 Nollywood filmmaker Moses Inwang’s latest movie, American Driver isn’t a film per se, but a promotional reel of material shot along the sidelines of the Golden Icons Academy Awards (GIAMA), which is held annually in the United States of America.

Which is not to say that American Driver isn’t funny. If you ignore the film’s problems with structure; it starts out as a competition between two characters and then veers off into solo territory with only one of them, only to introduce the second guy midway into the film and then dispatch him off again.

Jack Curry (Evan King) is a bum who ‘retired early’, that is to say, immediately after graduating from University. He spends his days sleeping in late and then constituting a nuisance generally, much to the consternation of his frustrated mother. When Curry’s mama isn’t drinking, splayed on the couch and nailed to the television set, she is nagging him to go out and get a job.

Curry does eventually, at a startup organising an awards ceremony that flies in the biggest movie, music and comedy stars from Nigeria to reward them in Texas. It is obviously somebody’s hustle but don’t let anyone hear you say it out loud. Curry has a job description of noiselessly ferrying the stars from the airport to their hotel rooms and then to the venue of the GIAMAs, but nincompoop that he is, he finds a way to either get entangled in the lives of his high profile guests, or drag them into his own mediocre but adventure-filled existence.

The premise is nothing original. Think a reverse 30 Days in Atlanta, with a White protagonist plus more laughs and you have an idea where American Driver is going. The first half is capably done as the screenplay (credited to Patrick Nnamani and Moses Inwang) benefits from bursts of appropriate comic timing. The lead, Evan King is no RMD in terms of acting chops but he has natural comic timing and deploys his charms and physical looks to interpreting the material.

Would that the materials were stronger and perhaps Mr King would have been even better. The film begins to go off the rails when the celebrities start to appear. In a series of cameos that go nowhere fast, some big names show up in solidarity to GIAMA, Inwang and Jim Iyke, who is a co-producer on the film.

Nse Ikpe-Etim’s cameo is embarrassing, AY’s is about as AY as you can get; short on laughs but heavy on the Warri boy shtick. Nadia Buhari phones it in as per the usual and singer Emma Nyra is a blank state throughout. The less said about Big Brother Africa’s Melvin Oduah, the better.

Jim Iyke saves for himself a much more significant supporting role but he needn’t have bothered, as he drags his own film down with the kind of juvenile acting that he should have left behind years ago. To be fair to him, the writing at this point of the film leaves little to be desired but someone with Mr Iyke’s experience should be able to lift such mediocrity. He doesn’t.

To be honest at this point, the only reason one is watching is Mr King as the whole plot has pretty much run out of steam and is just driving round in circles until it tapers off at the ending that provides almost no resolution. But watch out for Anita Chris who as a staff of GIAMA and object of fantasy for King’s Curry keeps with the campy spirit of the film and blends in with the material. American Driver could have been better, but it also could have been worse.