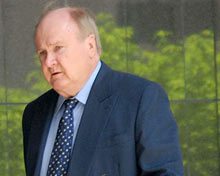 The former head of US construction company KBR was sentenced to 30 months in prison over the bribing of Nigerian officials to win contracts, the US Justice Department said Thursday. naijagists.com

Albert Stanley, the former chief executive officer of the engineering giant, also must pay his former company $10.8 million in restitution under the judgment handed down in a Houston federal court.

Stanley, 69, pleaded guilty to violations of the Foreign Corrupt Practices Act and conspiracy to commit mail and wire fraud.KBR and its parent company, Halliburton, have also agreed to pay a $579 million fine after pleading guilty to corruption charges in Nigeria.

He was accused of participating in a bribery scheme between 1995 and 2004 to obtain construction contracts worth more than $6 billion, according to a US Justice Department statement.KBR was part of joint venture TSKJ — which also included French firm Technip SA, Dutch and Italian firm Snamprogetti Netherlands BV and Japanese firm JGC Corporation — to build a liquefied natural gas facility on Bonny Island in the Niger Delta.

The joint venture allegedly paid $183 million in bribes to a variety of Nigerian government officials, according to the Justice Department.Stanley, who was fired by Halliburton in 2004, cooperated in the investigation in exchange for a lighter sentence.The case sparked criminal investigations in France, Switzerland, Nigeria and Britain.

Two British men, attorney Jeffrey Tesler and businessman Wojciech Chodan, also were sentenced on criminal charges by a Houston judge. Tesler is getting 21 months in prison while Chodan is sentenced to one year of probation.Last month, Japanese trading house Marubeni, which the TSKJ joint venture hired to help get the engineering contracts, agreed to pay a $54.6 million fine in the United States, the Justice Department said.

In 2010, , Technip and Snamprogetti each agreed to pay $240 million fines while JGC settled for a nearly $219 million fine.