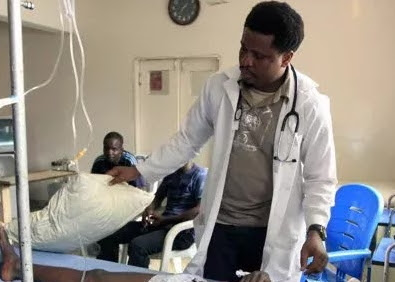 Here is an urgent message written by a US woman on the fate of her husband currently being held at Dalhatu Araf Specialist Hospital in Lafia, Nasarawa state.

Check out the unedited email sent to NG few hours ago below;

This is in regards to Dalhau Arif Specialist Hosp in Lafia Nigeria. I am from USA my husband from US Army was in a bad motor vehicle accident on his way in a taxi on business when there was a serious accident. He was taken to that hospital by ambulance and was ready for discharge after approx 1 week. He had no memory of the accident and didn’t know how he got there. After talking to the General in chg of his base had his men and police search for him because nobody knew where he was.

When ready to lve he was told by Dr and Administrstor Samuel Balogun that he could not lve until he pd his bill $400. Being on active duty my husband is not allowed to have any $$ and no access to any. I myself being low income on disability here in the US didn’t have it either.

Now after a month he is still there although I pd via western union to Mr. Balogun 1/2 pmt of my last dollar to him with promise to pay the rest in a few wks. My husband talked to him pleading that he be discharged as he is losing money not being pd while in duty. I’m sure the hospital would make more money by freeing up his room to another patient. Keeping him without his permission against his will is being held captive is what I call kidnapping being held for money even after paying half. I never heard of such a thing.

The General flew there from Washington DC to ck things out and explain to the Administrator that he needs to return to duty asap. The General said NO!! He isn’t being reasonable at all. His explanation is that other Americans were treated there but didn’t pay so now Americans can’t lve until pd in full. Not everyone has the money right then and there in an emergency. However I did pay a lawyer we had hired the full amt to get him out. Pd him via western union as well to pay the hosp and he disappeared and never pd. The General has men and police looking for him now for fraud and stealing my money as I had to pay him $630. So as you can see how I don’t have the full $400. I could only send him $200. I have all my receipts. I have no more money right now. How long do they plan to keep him there?? Forever? Surely there must be hardship cases or send me a bill he would sign an IOU I will promise pmt by 8/4. He is not allowed out of his room. He knows nothing of that country. Is there trying to help your army fight against the terrorist activity in the area and needs to get back on active duty status or he may be in trouble with the military himself. Is there no compassion or consideration for military or Americans by the people and govt of Nigeria?

I see it said the hospital is owned by the govt. My husband and myself are extremely upset and disturbed by all of this. The lawyer that took off with the hospital money was a Chris Okoro of Chris and Clarke law chambers. He said his office was about an hr away from the hospital but had me send western union to Akure Ondo same as adm. Can somebody please check into this or let me know where to complain. I don’t want to cause a big problem by contacting Nigerian and American embassies or any other govt agency to help him get released now!! He needs to get out of there. He can’t stand being captured like a prisoner. The only answer we get is they do thinks differently in Africa!! Not like this. God is incharge of all of us abd they will have to answer to him in the end.

I have many African friends at my church who are like my family. I am also a retired medical field person and Drs abd such take an oath as well to help and save peoples lives not keeep them captive and kidnapped which is the bottom line. His name is Sgt Robert Sanders a very honorable man. Please help us! I really do appreciate it!