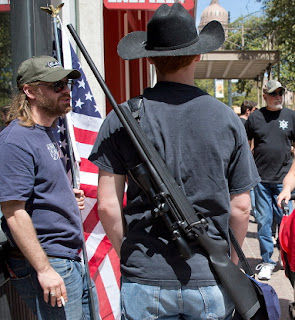 Again another psychotic madman strikes killing over 50 people and injuring more than 500 in the Land of the Free and Home of the Brave. Never a day goes by in America that there isn’t a homicide caused as the result of a gun in the hands of an irresponsible person.

A gun is not a toy – it kills people and currently more than 300 million Americans – a third of the population- own them.

While some are calling for the control of guns others are clamouring for them: they claim the Second Amendment gives them the right to own guns to protect themselves. The powerful National Rifle Association, for instance, has lobbied every President in recent years against gun control. Owning a gun is like a birth right to many: they’ll claim people in the family have owned guns for generations and they intend to carry on the tradition. Perhaps, but in the past people used guns for hunting and not to turn into Rambo wiping out scores of people!

Again protecting themselves from what? If there wasn’t a proliferation of readily available guns, in the first place, they wouldn’t need to protect themselves with such weapons.

Buying a gun is easy. All you need is two forms of identification and in some states you can legally own a firearm before you are old enough to drive a car, buy alcohol or even have sex! Only preliminary checks are made when a person buys a firearm: checking to see if they have a registered address and no outstanding warrants. No checks are made to see if they’re psychologically sane, enough, to carry a firearm or whether they belong to any far-right or terrorist organisation – you have the money, you can buy a gun!

Even though there are limitations on the kinds of firearms you can purchase, people have devised ways of converting single shot guns, for example, into fully automatics; that is to say a rifle that can fire one bullet per squeeze of the trigger can be converted to pump out over 500 bullets per minute, just like the Las Vegas shooter converted his guns to do with the help of a simple device called ‘bump stocks’. While there are a lot of gunsmiths who’ll readily convert, illegally, a gun for a fee, conversion kits are widely available online even through websites owned by Walmart!

Hollywood also has to share in the blame for promoting the gun culture in America. Every year dozens of action packed films are released that glamourizes the gun culture. All it takes is for a demented fantasist to pick up a gun in an attempt to try and recreate his favourite actors’ murderous killing spree and this has happened before where people have imagined( – probably after taking a cocktail of drugs and alcohol!) they are Neo from ‘The Matrix’ or Rambo and have gone on killing sprees.

Gun crime used to be the sole reserve of hoodlums and gangsters: this has now spread to include anyone who has a gun and can become unhinged and go on the rampage. The Las Vegas shooter has been described as a quiet millionaire with no criminal record who just suddenly lost the plot.

Some people get overwhelmed by the power of owning a gun: they’ve suddenly got the power of life and death over somebody in their hands and can’t wait to use it – one of the reasons young Americans kill each other indiscriminately, they’ve got the power to do it and will likely shoot first without thinking about the consequences of their actions.

A lot has been said about gun control in America. In the wake of the Las Vegas shooting more will be said but nothing will be done: the President will go on TV to condemn the killings and offer his condolences to the bereaved and the people will bury and mourn the dead until the next time. And there will be a next time and another next time ad infinitum until all the guns are taken off the people. Perhaps it’s time to repeal the Second Amendment which allows people to freely buy guns as suggested by Michael Moore, the US filmmaker.

Firearms ownership should be limited to the security services who need them to maintain law and order: when you have a third of the population running around with firearms it complicates things; everybody becomes a potential target as everybody is a potential murderer.

You can’t have your cake and eat it: if Americans want to carry guns, people will die – sometimes en masse!

Perhaps President Trump should do more to control guns in America and home-grown terrorists instead of banning every ‘Muslim terrorist’ coming into the country.

Continue Reading
You may also like...
Related Topics:American, guns, obsession

Our Depraved Society: How Ritual Killings, Cultism & Kidnapping Have Spiked In Recent Years
The 7 Deadly Sins A Nigerian President Must Never Commit