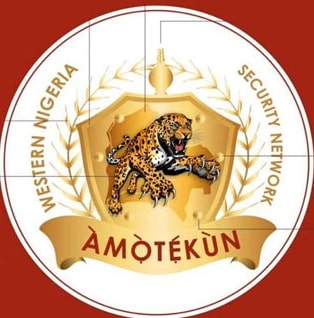 “A leopard shall watch over your cities…” Jeremiah 5:6

2 major episodes in Yoruba history may place in context the Amotekun imbroglio. One happened in the 19th century and the other in the 1960’s. The first was a theatre of blood and brawn. The second was a rhetoric bluster. The first did not materialise under the public glare, but it was significant because it flared beneath the public eye. It occurred during the early embers of the civil war before hostilities paralysed what was known as Nigeria.

An eyewitness and player, retired Major Raphael Iluyomade, related this story to The Nation in his Ibadan home a few years back.

On hand to interview him were myself, Femi Macaulay, Oladele and Hannah Ojo.

“The barracks here in Mokola Ibadan was the Third Infantry Battalion. So, the northerners were harassing the Yoruba because it was one of the wishes of Ojukwu that every soldier should go back to his own state of origin: the Midwesterners should go to the Midwest and the Yoruba people should stay in Ibadan. The northerners should go to the north so as to accomplish the Aburi convention requested by Ojuwku.

So, when every soldier is in his own state of origin, Ojuwku would be confident to come and have a meeting with General Gowon. They (northern soldiers) refused to go. And by that time, there were threats to Yoruba officers by the Hausa/Fulani, particularly myself, because the battalion commander then, Major Sotomi, didn’t know what to do. Every now and then, he would call me to go and speak to the Hausa soldiers. I didn’t want to use the wrong word. So I would go there and talk to them as directed. They refused. They would say no. So, every day, they were arming themselves with rifles and ammunition inside.

Q: You mean the Hausa/Fulani soldiers?

Yes. They were carrying ammunition with weapons, which meant that if any war broke out, they were at advantage, and they could shoot the whole of us.

Q: Who was giving them instructions? Were they reporting to their immediate officers?

They were becoming unruly and they were not listening to instructions, except it was from their own people.

Q: Which officers do you think were giving them instructions from the higher command?

There was one Captain Bugaji, who was the adjutant of the battalion. He was a pure northerner. He himself disappeared during the war. He was one of the people captured, and we can’t trace his whereabouts any more. There was a day Gen. Hassan Usman Katsina came to Ibadan to speak to the troops. The governor of the Western Region, Gen. Adeyinka Adebayo, was with him. Some people from the army headquarters in Lagos were also with him. They did not allow any journalist to enter the compound. Then he spoke to us in a bad and undiplomatic way. He said that the (Hausa/Fulani) soldiers would not leave Ibadan and that if they were threatened, he would use 40 soldiers to defeat the Yoruba.

So, he boasted and boasted, saying, ‘Give me the green light, I’m going to produce Ojukwu himself.’ He hammered on that. He came with two other officers. Three Yoruba officers were there myself, Makanjola, who is no more now, and Col. John Adedipe, who is still alive. He lives at Iwo Road (Ibadan). What type of threat to a whole nation by a single man? We looked at ourselves and said we were done for, if we didn’t do anything or if our leaders didn’t do anything.

Q: You mean he was afraid?

He was perturbed. He didn’t know what to do except to report what had happened. But Gen. Usman Katsina came to Ibadan, maybe with the permission of Gen. Gowon, who was the head of state then. Maybe he took permission from him to say what he said, nobody knew. As I said, I was a full lieutenant, so a junior officer. But I have every detail in my head, and that’s what I’m reproducing today.

Q: Were the soldiers of northern extraction more in number?

They were more in number because the infantry soldiers, those who carry guns, those who fight the real battles, were predominantly northerners. The soldiers of Yoruba origin and those who came from other parts of the country were clerks, medical men, administrators and supply and transport officers in the petrol depot. So, when they ran away from the north, I was the one that trained them and converted them into infantry men, so that if there was a threat, they had to fight. I taught them the way to handle the rifle, tactics and a lot of things. I was the one nominated to train them, and I really did. The intimidation by Usmam Katsina could be considered an affront to the Yoruba.”

The other incident happened during the advance of the soldiers of Uthman Dan Fodio, who wanted to spread its tentacles to Yorubaland. Ilorin had been sacked, and Oyo Ile, the old Oyo capital, also dislodged, and that put the whole race under the shadow of an occupying army. The Fulani invaders were a cavalry, rumbling from village to village, kingdom to kingdom and pillaging its way to victory and glory. The date of their infamy was 1840 when the Yoruba, led by the fierce republican ethos of Ibadan with an infantry force with men of valour and cunning, entrapped the invading force. They enfeebled foreigners in a night massacre that put paid to any imperial fantasies by the otherwise redoubtable thrusts. The masterstroke of an army now suffered a stroke from the indigenes.

These scenarios were unnecessary. In the first instance, the Yoruba worked with the Hausa/Fulani to win a war of unity. The Yoruba provided the brain of the war, if the north the footmen. In the second example, the Dan Fodio’s army could have retained its myth of the invincible if it had left the west alone. One can only speculate what turn the civil war or the Nigerian crisis would have taken if Major General Katsina’s words leaked to the public domain. In spite of the inflammations of temper, it is best to leave well enough alone. Let the leopard growl in peace. Amotekun is now a state of mind, which is more potent than an institution. Unlike the quiescence of General Hassan’s insolence, Amotekun is a public spill. No proud race wants to be a bystander and spectator of its own humiliation.

Men like Abubakar Malami know little of history but carry their lofty tasks with juvenile fervor. As the attorney general, he ought to learn a thing or two about the purpose of law and, more importantly, the maturity of public office. He also needs to know his society and read the newspapers, so he can avail himself of facts that are commonplace. We need to educate him, for instance, that we have a similar force called Hisbah with an aggressive police. We all also applauded the civilian JTF that worked when our army was limping in the battlefield when they were not fleeing like rabbits. He probably didn’t know that before his uncoordinated balderdash of a press release.

Amotekun is not, and has never been projected as a sovereign force. It is a cooperative entity as part of the federal infrastructure of security. We saw cowardice when the inspector General of Police endorsed it with his presence and retreated afterwards. The Southwest governors did not only do a good thing; they performed a worthy feat. To say Amotekun is illegal is to throw the law at vigilantes, or even my mai guard because it implies I have taken my security away from the federal government. How puerile can it be.

In his allegory, our beloved novelist Chukwuemeka Ike told the story of a bottled leopard to show how the beast in us can come from cultural misunderstanding. What has happened with Malami is less about law but more about cultural and hegemonic mischief. The Yoruba leopard is not here to growl for a secessionist lamb. Its targets are hoodlums, marauding herdsmen, kidnappers, et al. Rather than bottle the Yoruba leopard, why not sit at table over fura and amala. One will help the other travel through.