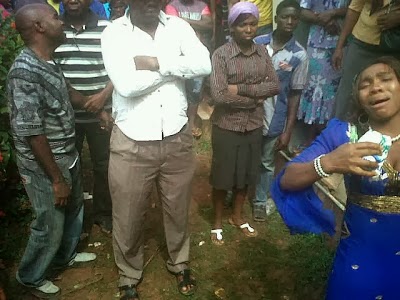 At least 28 people died in the wee hours of Saturday at the popular Holy Ghost Adoration Ministry crusade ground in Uke, Idemili North LGA of Anambra State during a stampede allegedly caused by election campaign organized by Governor Peter Obi. 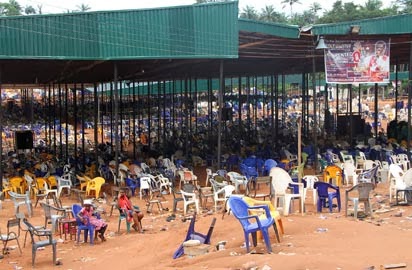 The crusade, organized by Rev. Fr. Emmanuel Obinma for prayers, healing and spiritual retreat, attracts thousands of people, but the one that was held yesterday on the Feast of All Saints turned tragic. 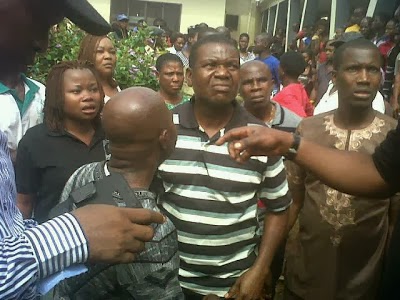 An estimated 100,000 worshippers reportedly attended the crusade because, besides coinciding with the Feast of All Saints, it was also the first Saturday of the month.

Apart from the dead 25 whose bodies were said to have been deposited at Immaculate Heart Hospital and Maternity, Nkpor and Charles Borromew Hospital, Onitsha, several others, who sustained various degrees of injuries, are receiving treatment in various hospitals in Onitsha.

Governor Peter Obi, who attended the crusade in company of 10 persons, including the National Chairman of All Progressive Grand Alliance, APGA, Chief Victor Umeh, the candidate of the party in the November 16 governorship election, Chief Willie Obiano, as well as two siblings of the governor, was said to have left the crusade ground around 3.30am, before the tragedy.

Meanwhile, an unconfirmed report blamed the stampede on the governor. The report quoted eye witnesses as saying the stampede occurred when Obi started campaigning for his gubernatorial candidate and there were shouts of disapproval, causing his security aides to fire tear gas into the crowd.
But Obi, who said, yesterday, that he was heart-broken by the event, said he went home after the crusade satisfied on the rewarding spiritual encounter, only to get the news later.

He consoled all those affected one way or the other and said those responsible would be punished if found or God will punish them if not found.
The governor said: “When the spiritual director gave me the opportunity to speak, I noticed something unusual as I saw people carrying the posters of politicians at the adoration ground.

“I have been going for the crusade there and, on this occasion, I stayed for six hours and left. Our vehicles were parked two kilometres away and this is a place people have been visiting for a long time without any incident.

“It was later that I heard what happened and we are working hard with security agencies to find out those behind the incident. A holy place should not be a place for playing politics.”

An eye witness, Mr. Abuchi Ifebuzo, 31, told Sunday Vanguard at the premises of Crown Hospital, Nkpor where he and some of the injured persons were receiving treatment, that the crusade closed at about 5:08 am yesterday and, as the people were attempting to leave the ground, there was a stampede and people were falling on each other.

According to him, trouble started shortly after the event, when some people started shouting “fire’ fire, fire,” adding that, in the confusion that ensued, the worshippers started scampering for safety and, in the process, began to fall on each other.

Another eye witness at St Charles Borromeo Hospital, Onitsha, Chinenye Etinanma, who said he came to visit her sister who was equally a victim, said she escaped because they were the first set that encountered some people carrying the placards of politicians at the adoration ground.

While some of the worshippers attributed what happened to sabotage, alleging that some people raised false alarm of fire, others believed it was an act of God as the people were already on their way out when the stampede happened.

At the two morgues at Immaculate Heart Hospital and Borromew Hospital where the bodies were deposited, many people were seen wailing and crying uncontrollably following the loss of their dear ones.

A woman, who refused to give her name, said her mother was among the dead, adding that her father died only two months ago.

There were however some of the victims who were thought to have died, but regained consciousness later and were either driven home, or admitted into the hospital for further treatment.

Following the development, Governor Obi cancelled all his engagements for yesterday. Some of the events he had planned for the day included a governorship campaign rally at Nsugbe, the home town of the governorship candidate of PDP, Chief Tony Nwoye, a live radio programme, flag- off of some road projects, inspection of on-going shopping mall at Onitsha and the on-going stadium at Awka.

The governor was among the first group of persons to visit the scene of the incident and the various hospitals in company of two police Deputy Inspectors General, DIGs, visiting the state, Mr. Philemon Leha and Kachi Udoji, and the Anambra State Commissioner of Police, Mr. Bala Nassarawa.

Sunday Vanguard could not speak with the Spiritual Director of the Adoration Centre, Obinma, as he was said to have gone to brief the Archbishop of Onitsha, Most Rev Valerian Okeke. Obinma was also said to have visited the wounded in hospital.

Coordinator of the centre, Bro Achebe Nnadi, who was busy entertaining questions from people, said the problem was caused by a group of people who started shouting ‘fire, fire’ when there was none.

Meantime, Obi has directed that the names of all the wounded persons be compiled, although he could not say immediately if the state government was going to pick their hospital bills.

The governor also visited the Archbishop of Onitsha over the matter, although what they discussed was not made public.

He also said that a panel of enquiry would be set up immediately to ascertain the immediate and remote causes of the incident.