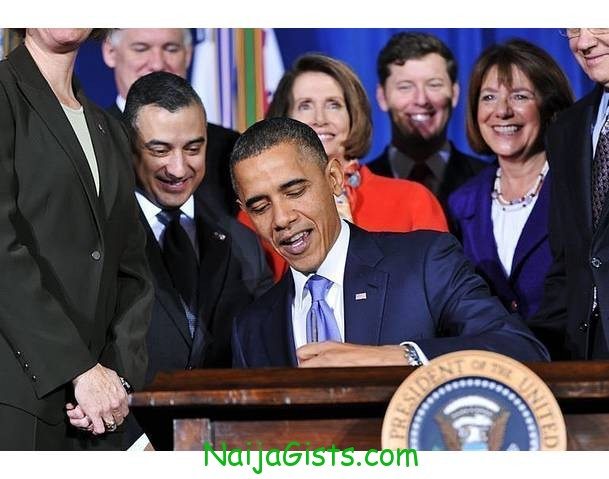 Below is the full text of Obama’s Memo, which was released on Tuesday 6th of December 2011, from the Office of the White House Press Secretary. naijagists.com

“The struggle to end discrimination against lesbian, gay, bisexual, and transgender persons is a global challenge, and one that is central to the United States’ commitment to promoting human rights.”

Since taking office, President Obama has demonstrated that his vision for a brighter future includes greater equality for Lesbian, Gay, Bisexual and Transgender (LGBT) Americans. The President and this Administration are dedicated to eliminating barriers to equality, fighting discrimination based on sexual orientation and gender identity, and engaging LGBT communities across the country. The Administration’s dedication to LGBT rights does not stop at our borders, as the President made clear at the United Nations in September of this year when he said: “no country should deny people their rights because of who they love, which is why we must stand up for the rights of gays and lesbians everywhere.”

Today’s memorandum applies to the Departments of State, the Treasury, Defense, Justice, Agriculture, Commerce, Health and Human Services, Homeland Security, the United States Agency for International Development (USAID), the Millennium Challenge Corporation, the Export-Import Bank, the United States Trade Representative, and such other agencies as the President may designate.

Even before today’s memo, U.S. agencies have been working to protect and promote the rights of LBGT persons around the world. Since January 2009, Secretary Clinton has directed the Department of State to champion a comprehensive human rights agenda—one that includes the protection of LGBT people.

Around the world, the State Department is:

*Engaging bilaterally and regionally in conjunction with U.S. embassies, civil society, and multilateral agencies to encourage countries to repeal or reform laws that criminalize LGBT conduct or status.

*Reporting on the conditions of human rights of LGBT people in each of its annual, country-specific Human Rights Reports.

*Protecting LGBT refugees, asylum seekers, and migrants through a protection strategy developed with other U.S. Government agencies, the UN High Commissioner for Refugees and NGOs.”