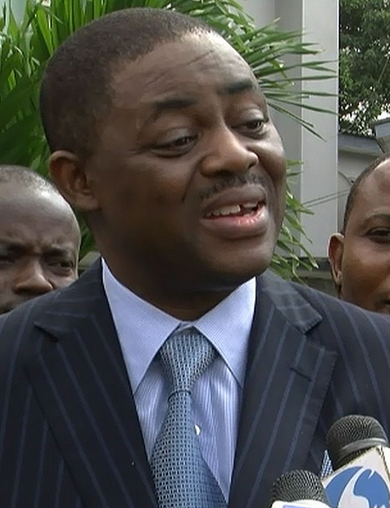 Femi Fani Kayode, I’m not too conversant with his new name, meanwhile he has not changed the old name on Facebook. He said our country, Nigeria, is built on a satanic foundation.
He probably got that revelation from the debilitating post-electoral loss syndrome that is currently ravaging him and a few of his like.

Why did FFK not remember the country has a satanic foundation when he hustled himself all through to become a special adviser to President Obasanjo and later a minister?

Why did FFK not remember the country has Satan as its foundation stone when he worked as the director of media and publicity of Jonathan/Sambo campaign organisation?

Of course if President Jonathan had won the re-election, he would have elevated the reward of FFK to something higher-say a minister.

Okay, let’s even forget about FFK, for a second. What about his direct progenitor, Remi Fani Kayode, who was a successful lawyer by the standard of his days?

He rose through politics to become Deputy Premier to SL Akintola(his detractors called him Ese Ole from his initials!). Was the country built on a satanic foundation then?

When did FFK realise the country has a faulty foundation? When he was in power or when he’s out?

Oh! My goodness! Why did I have to waste so much energy writing this against FFK? He has a dossier of inane utterances in his kitty already. I am deleting this right away.