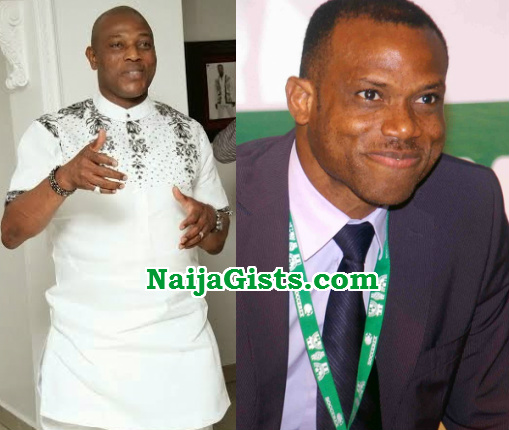 The Nigeria Football Federation (NFF) has attrib­uted the inability of the federation to give erstwhile head coach of the Super Eagles, Stephen Keshi, a resignation option as safe landing, to the frosty relation­ship between them.

A prominent board member of the federation, who spoke to SoccerStar in confidence argued that, “the option of forc­ing Keshi to resign was the last thought since it would be easier for a camel to pass through the eye of a needle than for him to accept such offer.

“We have an option of telling him to resign or sacking him and none of them is an offence. Keshi is not the type that resigns on the job otherwise he would have done that much earlier than now especially as he knew that the relationship with him has not been the best. If he is the type that values integrity, he does not need anybody to tell him to resign.

“Do I need to remind him that there has been a soured re­lationship with the federation since after the 2013 Africa Na­tions Cup? Whatever relationship lasted till the time of his sack existed because there are people close to him that we respect. This is a board that sacked him but was compelled to reinstate him. The federation reinstated him grudgingly and out of their own accord.

“What Nigerians may not know is that the current APC government is interested in his matter and may not want him to continue because of his behaviour and utterances. But, honestly, Keshi ought to have been wiser to tread with cau­tion since enemies surrounded him.

“Keshi will always be the architect of his own problem. For example, he appeared before a panel investing him, in­stead of him to avoid the media or at most tell them that he hoped the matter would be resolved amicably, he preferred to call the panel investigation as distraction. To the federation, it amounted to insolence.

“If Keshi is intelligent enough or has good advisers, why did he even disown or sack that agent who applied for him when the situation was getting out of hand? The best ap­proach he could give the situation was for the agent to write the Cote d’Ivoire FA to withdraw the letter,” the board mem­ber noted.

Asked if former Eagles captain, Sunday Oliseh would be the best replacement for sacked Keshi, the federation’s Ex­ecutive Committee member argued that though lack of expe­rience may not be a barrier for giving him the job, the pos­sibility of being on the same page with him might be the only thing that may count against him.

“We are not even looking at the whole concern about his lack of experience, but the possibility of working harmoni­ously with him. Those who know Oliseh will understand that he is a no nonsense person. Our major concern is the kind of relationship that would exist between us,” he quipped.