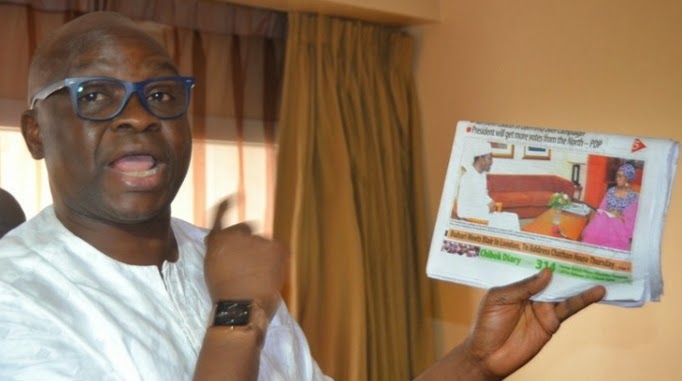 In a new press statement released by Fayose today in Ekiti, the controversial governor lamented that APC is lying to Nigerians by using photoshopped version of Buhari’s photos to make him look younger to Nigerians thereby helping in his reelection.

See the full statement below:

“The new deceit from the APC is to use a photoshopped picture of Buhari for posters in Lagos, making him look like a 50 year old man, whereas he is as old as my mother and cannot survive the rigours of office even as a governor not to talk of President of Nigeria.”

“The APC cabal claimed that Buhari travelled to the United Kingdom on a working visit and used fake pictures to back up their lies that Buhari met with ex-British Prime minister, Tony Blair and had a television interview in London.”

“Even when Buhari’s wife admitted that her husband was in the UK to rest, the APC cabal went on with their lies, using pictures taken in Transcorp Hilton, Abuja as proof of Buhari’s activities in London.

The same Fayose insulted Yoruba elders including Obasanjo calling them all sort of derogatory names.

Someone is lamenting already? It is too late to cry when the head is cut off.