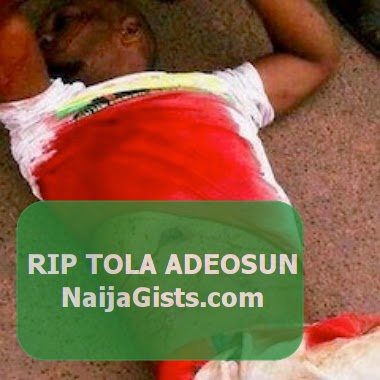 The hired political assassins shot an innocent man to death in front of his house yesterday as he was about to head out to a rally for Aregbesola in Ilesa Osun state yesterday.

Ogbeni Rauf Aregbesola, the Peoples Democratic Party (PDP) governorship candidate in the forthcoming election in Osun state moved his campaign train to Ilesa on Saturday, but prior his arrival some of supporters were believed to have stormed the town striking fear into residents.

Read what a source told Lagos-based media, PMNews below:

“Omisore’s gang of miscreants believed to be IBK boys were seen brandishing cutlasses and shooting sporadically,”.

“Tolu Adeosun, a member of the All Progressives Congress (APC) in ward 9 Ilesa East was shot death in front of his house around Osun Ankanra, in Irojo immediately he was identified by one of the miscreants as an APC member,”.

“May God spare Osun from Iyiola Omisore and his murderous gang, despite the obvious rejection of his candidature all over the state, he has begun to claim victory ahead of 9 August governorship elections,”

“Iyiola Omisore must be ready to kill thousands of Osun to actualize his ambition.”

The source further said that the assassins threatened to kill more APC members across Osun state.