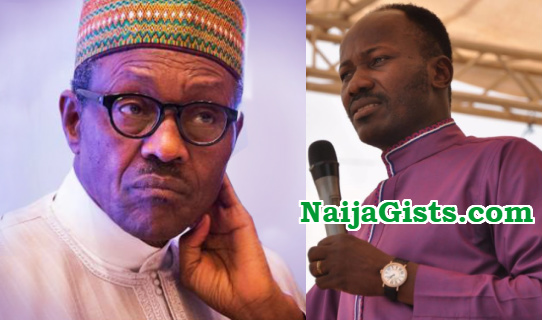 The cleric who reportedly escaped arrest in Abuja about 4 days ago has been invited to report at the Department of State Services headquarter in Abuja.

On Monday the 30th of January, the GO of Omega Fire Ministries will answer some questions to clarify his comments against Fulani Herdsmen.

The cleric who reportedly urged Christians to defend themselves against incessant attacks by Fulani herdsmen across the country will appear at DSS office tomorrow by 10am with thirty competent defense lawyers allegedly hired for him by Ekiti state Governor Ayodele Fayose.

He is expected to explain to the DSS how Buhari will be bereaved in 2017 and how Abuja will experience major fire explosion.

The agency is also expected to question his prediction that “Forces in Aso Rock are planning to poison  current First Lady (Aisha Buhari).”

A source at the agency said Apostle Suleman prediction is capable of destabilizing the country.

Continue Reading
You may also like...
Related Topics:Buhari, death, suleman