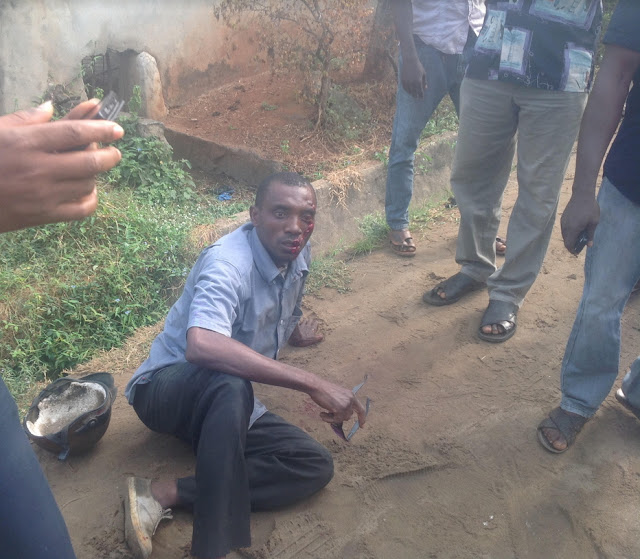 January 29, 2017 – The Menace Of Touts In Onitsha Anambra State: How Area Boys Are Killing Innocent Indigenes

In spite of Governor Willie Obiano’s suspension of illegal collection of fees and levies in Anambra State, touts have dared the government and continued to play hide and seek,waylaying innocent citizens particularly motorcyclists popularly called Okada riders and Keke drivers.

Today at the Basilica of the Most Holy Trinity Junction by GRA ,heading to 3-3, touts chased and pulled down an Okada rider from his cycle and the cyclist tumbled and hit his head on the tarred road sustaining a serious injury that would have plucked out his eyes.

As blood gushed out of his eyes,sympathizers rushed to help him while the touts took away his motorcycle.

In the process of running away with the motorcycle,one of the touts ran into an on-coming water tanker which crushed his legs.

As he laid on the road, the tanker driver who screamed in horror fainted on his steering and fell off his vehicle.

A police patrol team came around and arranged for the victims to be taken to the Hospital.