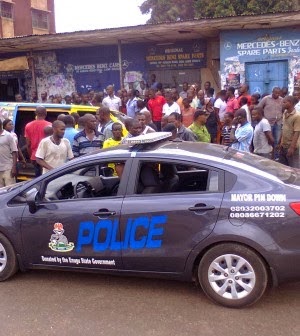 An Arab man working in Nigeria with Arab Contractors Construction Company is currently in police detention after allegedly killing a Nigerian construction worker in Enugu yesterday.

According to eyewitnesses, the expatriate simply identified as Abdul Lateef is a dreaded construction site supervisor who came from one of the Arab countries.

Upset by the way Arinze, a construction site worker is doing his job, angry Lateef allegely pushed him down from a 2-storey building around 11:30 am on Friday at the new Enugu State Secretariat.

Arinze’s co-worker almost killed the Arab man yesterday if not for the timely intervention of Enugu state police officials who whisked him away from the murder scene.

After false police report claiming that Arinze is still alive, the South-eastern zone of the Civil Liberties Organisation (CLO) insisted that “the Nigerian who was pushed down by the expatriate has died.

In a statement by its zonal director, Olu Omotayo, the CLO  described the action of the expatriate as:

Omotayo further condemned the brutal killing of Arinze and demanded that the police charge Abdul Lateef for murder.

“Nigerians cannot continue to be treated like animals in their own country,” he stated.

What kind of injustice is this? This man must be properly investigated.