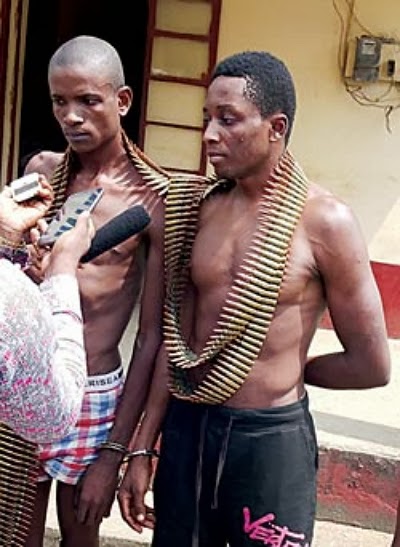 A 3-man teenage robbery gang that has been terrorizing residents of Ikot Omin, 8 Miles and Basin Development Authority in Calabar, the Cross River State capital has been nabbed.

The trio, Edem Basey Effiong, 18, Emmanuel Nkalu 19 and Aliyu Umaru 21, who usually adorn themselves in army camouflage terrorised the residents of these areas for several months before they were arrested through sustained intelligence and undercover efforts during the Christmas Period last year.

Parading them alongside other suspects, the Cross River State Police Commissioner Mr Kola Sodipo said the sum of 350,000.00 and 250,000 naira worth of recharge after the robbed one Ime Stephen who sell recharges at Basin Development Authority, Calabar at gun point.

”They robbed Imeh Stephen of Basin Authority at gun ;point of recharge card Valued at 250,000.00, and cash of 350,000.00m naira ; in their possession during the arrest were a pistol 7 live ammunition, Army Uniform, recharge cards and handsets”.

Mr Kola Sodipo also paraded the duo of Daniel Sunday, 25, and Prophet Friday, 19 , who were arrested on the 24th of December 2013, at Ikang, Bakassi with 800 live AK 47 ammunition, 7.62mm and 634v rounds of general purpose machine gun , GPMG, ammunition, 56 mm and 632 live assault rifle ammunition at Ikang while planning to cause havoc in Calabar during the Carnival period. “Their arrest aborted their plans to unleash havoc in the city during the annual Calabar Festival”.

Mr Kola Sodipo said explosive devices mounted by another set of militants, Eyo Okokon Nsa and-Peter Ibe during the period at Atan , at Odukpani in the outskirts of Calabar would have caused severe havoc and disruption to the festivities had the police not uncovered the nefarious plans and carry out immediate detonation of the devices. “110 pieces of dynamite fuses, nine bags of ammonium nitrate used to prepare the explosive devices were recovered and the suspects arrested and they confessed to the crime” . Sodipo said

During the period, according to the Police Commissioner, a total of eleven armed robbery suspects were arrested by the police in various parts of the state. The suspects include David Nse Abasi, Colins Okoh and Aka Jerome who blocked Mkpani / Ekori road in the Central Senatorial, District and robbed several persons includi8ng one David Onovo of 79,000,00 naira.

Other suspects arrested include Simon Michael Agba, Samson Kalu, Abosi whop robbed Iheme Tochukwu, the manager of Tolik Filling Station in Ikom of 57,000. 00 . Commissioner Sodipo said the sum of 278,000 00 was recovered from one robbery suspect, Godwin Samuel who robbed Chijoke Samuel of 2 Oti Ansa . Mr Sodipo said a total of 48 locally made pistols were recovered from criminals while 3,893 arrests were made with 955 prosecutions made in 2013. ‘

With increased visibility, intensive foot and vehicular patrols, sustained raiding of black spots, and collaboration with residents of the state the police would not relent in bringing crime to its barest minimum”.. He reiterated that trani9ng and retraining is being intensified by the Command to sharpen the ability of his men adopting proactive community measures in carrying out surveillance and community initiatives inoder to comply with directives from the ‘Police High Command to win the war against crime and terrorism”.