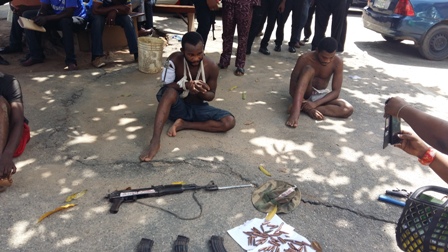 June 1st, 2016 – How My Religious Tattoo Led To My Arrest – Armed Robber Who Attacked Patients Inside Hospital Confesses

26-year-old Ifeanyi Smart, an armed robbery suspect who was arrested inside a hospital around Mile Two has said he was unmasked because of his victim’s generosity.

Smart and one Deji (still at large) had attacked one Cyril Uba at his residence on Bola Lateef crescent, Lakeview Estate, Amuwo Odofin.

The suspects allegedly tied up the housemaid who they first encountered before entering the man’s room where he, alongside his wife and children were hiding.

“As soon as we entered the man’s room, I tried to hit him with an axe I was holding but he blocked it with his hand and gave me a head blow. I lost balance and he took the axe from me and hit it on Deji.

“So, we ran out of the house with serious wounds and the man was chasing us. Later in the morning, I went to AMC Hospital around Mile Two to treat my injury.

“I did not know that the man was also being treated in the same hospital. At the hospital I was shouting that I was hungry and I don’t have money. The man who was in another ward heard someone screaming and sent N5, 000.

“He did not know I was the one and I did not know him either. I really did not know the house we went to because it was Deji who took me there. So, after collecting the money, I decided to go and thank the good man who gave a stranger N5,000 to eat. After thanking the man, I went back to the place they were treating me. That’s where I was before the police came and arrested me.”

Unknown to Smart, the housemaid had noticed a tattoo on his upper arm with the inscription “the Lord is my Shepherd.”

According to the police, the victim lodged a complaint at the station before going to the hospital for treatment and he indicated that the maid identified a tattoo on the upper arm of one of the suspects.

“When the man gave him the money. He did not know it was the people who have robbed him until the suspect went and thanked him. As soon as the suspect approached the man, he saw the tattoo and also saw his injury, which was at the same spot he hit him.

“So, the man called the maid to come and gave her another N5, 000 to go and give the suspect in order to identify him. As soon as the maid saw the suspect, she recognised him as the person who tied her. That was how we arrested him,” said a police source.