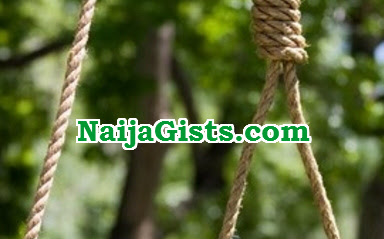 June 1st, 2016 – HIV Positive Nigerian Woman Commits Suicide By Stabbing Herself To Death In Enugu Forest After She Tested Positive At Hospital

Celestina Mamah, a 46-year-old indigene of Udenu LGA of Enugu has terminated her own life over HIV diagnosis.

On May 28th 2016, she left her home to the hospital at about 9am where she allegedly tested positive to HIV.

According to investigations, she became hopeless and suicidal after the HIV diagnosis.

She managed to return to her house and around 6pm headed to a forest in Udenu where she stabbed herself to death.

Her lifeless body was discovered at a forest near Ogwu Rest House in Udenu on Sunday the 29th of May.

Female DELSU Student Posing As Wizkid On Facebook Arrested For Duping Fans Of N10.4M
Armed Robber Arrested Inside Hospital In Mile 2 Lagos Confesses “How My Religious Tattoo Exposed Me”