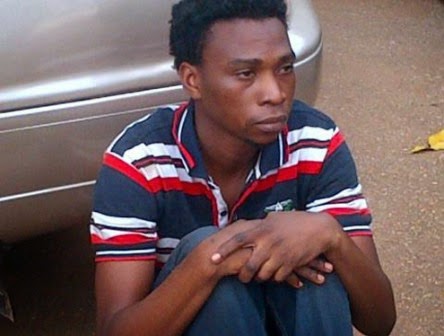 A robber arrested in Ibadan

A notorious robber in Ibadan has been nabbed during his wedding ceremony.

42-year-old Olumide Asiyanbi said police caught him while he was signing his marriage certificate at a wedding registry in Ibadan.

“I was arrested on my wedding day. I met the gang leader, James Agba, last year. He told me he knew how we could be getting regular money. He then initiated me into the gang. I have taken part in at least 10 operations since I joined them.
We used guns but I don’t know where James was buying them. Sulaimon and Alhaji, who are also in the gang, knew how the guns were bought for our operations. I have fired shots at our targets but nobody was killed.”

Oyo Police command alleged that Asiyanbi was a member of a notorious 6-man robbery gang terrorising residents of Challenge in Ibadan.

His confession led to the arrest of a 62-year-old Ghanaian man.