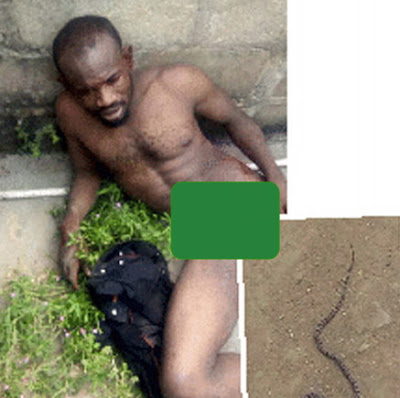 Meet Deji Oladeluyi, Ota’s most wanted burglar who has been terroriszing residents of the area for a while.

He was caught last week Sunday while hiding inside a soak away pit with a live snake for protection at the Iyesi area of Ota.

Before he was caught, he broke into a mansion at Famous Estate while the occupants were in church.

While he was about leaving with the valuables stolen from the mansion, a vigilant neighbour intercepted him and raised an alarm.

He immediately scaled the fence into another compound where he hid himself inside a soak away pit with a live snake around his neck.

He was forcefully removed from the soak away pit by a angry mob while the snake was killed.

The suspect was rescued by Obasanjo Farm Police Division in Ota just as the angry mob was about to set him ablaze.

Here is his confession before police took him away.

“My name is Deji Oladeloye, I live at Iyana Iyesi. I don’t know anyone in this community; I have only come here to rob people. I am an indigene of Ondo State. I don’t belong to any robbery gang but I carry out my operations alone.”

He was arraigned before an Ota Magistrates’ Court on Monday.