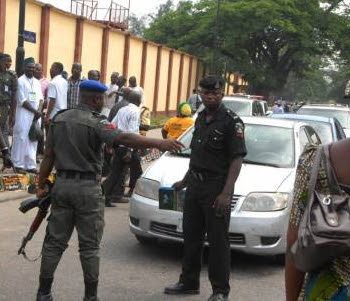 Ofuajo Eseogbene was today brought before an Ota Chief Magistrates’ Court in Ogun over alleged burglary.

The  25-year-old accused, whose address is unknown, is facing a two-count charge of stealing and burglary.

The Prosecutor, Cpl. Abdul Kareem Mustapha, told the court that the accused committed the offences on June 26 at about 2.00 a.m. at No. 2 Ireakari St., Itele, Ota.
Mustapha alleged that the accused unlawfully broke into the house of the complainant, Pastor Adegbenle Taiwo and stole valuable items.

He said the offences contravened Sections 390(9) and 411(1)(2) of Laws of the Ogun State.
The accused, however, pleaded not guilty to the charge.

The Chief Magistrate, Mrs A.I Adelaja, granted the accused bail in the sum of N500,000 with two sureties in like sum.

Adelaja held that the sureties, who must be resident within the court’s jurisdiction, should swear to an affidavit of means, including evidence of tax payment to the Ogun Government.
She adjourned the case till Aug. 9, for hearing.