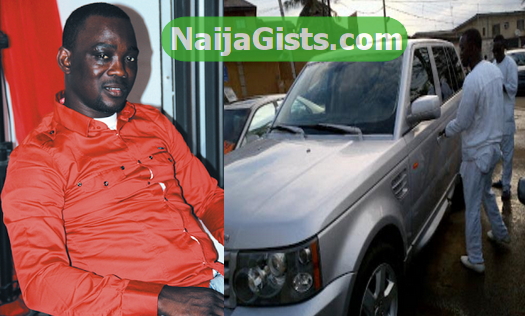 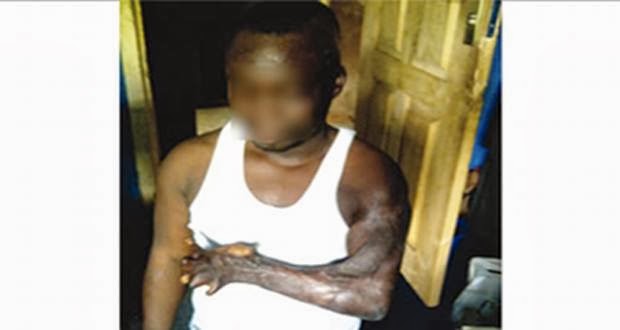 The handicapped man pictured above identified as Kasali Adegoke is the leader of a robbery gang who attacked Fuji star Wasiu Alabi Pasuma few months ago in Lagos.

As earlier reported, on that fateful night, Pasuma was robbed at gun point by the armed robbers around Ahamddiya area of the state.

He was blindfolded and driven around town for hours before being dumped on a bush part.

Kasali, a 32-year-old man who is based in Ogun State claims he often shuttles between Lagos and Ogun to steal any vehicle his receiver in Cotonou requested for.

After his arrest, Kasali confessed to Ogun State Anti Robbery squad that he had sold Pasuma’s car to a dealer in Cotonou for 950,000 naira when the used version of the 2006 Range Rover Sport sells for N3.5 million.

Hear what Kasali said in a confessional statement below:

“I have a receiver at Cotonou who usually calls to place orders for any type of vehicle that he wants. Before we stole Pasuma’s car, my buyer had already told me that he wanted a Range Rover Sport. We were just on the lookout for possible victims when we noticed Pasuma’s car.”
While he was with us, we had no idea that he was Pasuma. We did not recognise him. It was the next day that we realised that it was Pasuma car we snatched the previous night when the news was all over town.

“By that time, the car was already in Cotonou. We drove it that same night to a border town in Ogun State where one of the receiver’s boys was waiting to drive it back to Cotonu. We were paid N950,000.”

The leader of the notorius 8-man armed robbery gang claims he had killed over 20 people despite his disability.

On how he handles rifles with one hand, Kasali Adegoke said:

“I was badly burned as a baby; I was just 13 days old when someone threw a burning material through the window on my bed. By the time I was rescued, the left side of my face and my left hand were badly burned.

“Despite the handicap, I was able to master the art of shooting with an assault rifle. I would rest the gun on the ground while I loaded it and would support it with my deformed hand while I shot”

Kasali and 3 other suspects were arrested by SARS officers in Obele, a town in between Nigeria and the Republic of Benin last Monday.

After his arrest, his other gang members were arrested at the Iju Ishaga area of Lagos state.

The also killed 6 police officers in Kwara state and another 5 policemen at Imeko area of Ogun State in a bullion van attack in September 2011.

What a bloody group!
Everyday is for the thief and one day for the owner.

Due justice must be carried out on these people.

May the souls of the victims rest in perfect peace