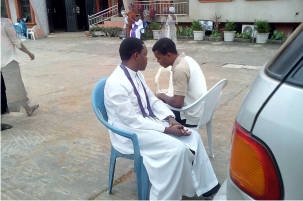 The victim, Reverend Father Daniel Nwankwo was shot around 9am this morning at St Thomas Aquinas Catholic Church in Omole Phase 1 area of Ikeja.

According to Parishioners who witnessed the attack, the victim had just attended to a church member’s confession before he was shot after the robbers allegedly demanded for an undisclosed amount of money.

When he couldn’t provide what they requested for, they allegedly shot him and fled.