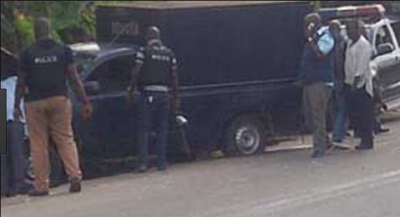 Chaos broke out today in some parts of Asaba, the capital city of Delta state after a robbery gang attacked a bullion van and carted away the total sum of sixty million naira.

The ambush attack carried out at the ever busy Koka junction on Benin Onitsha expressway caused serious traffic gridlock as motorists abandoned their vehicle in the middle of the road when guns boomed during the midday raid as the robbers in a convoy of 3 vehicles exchanged fire with eight policemen escorting the bullion van belonging to United Bank Of Africa to Agbor Delta state.

He lamented that some banks are fond of using non bullet proof bullion vans despite warning by the Police command.

DSP Aniamaka who confirmed the ambush attack said no life was lost and no injury was sustained in the shootout.