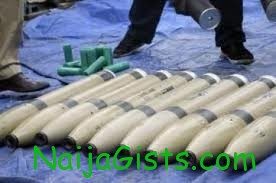 Robbers used explosives suspected to be dynamite yesterday to blow up the safe of a first generation bank, opposite the University of Port Harcourt (UNIPORT), Choba, Port Harcourt, in Rivers, State, Southsouth Nigeria. naijagists.com

The sound of the explosion caused pandemonium as people suspected that Boko Haram was bombing.

Nobody could ascertain the number of casualties at press time because the area it happened is a terminal point for loading passengers and off loading students and travellers coming in and out of UNIPORT and the capital city.

Witnesses who called reporters on phone said many people lost their lives in the night operation and others sustained injuries in the melee, while cash was carted away by the robbers.

It was learnt that the armed robbers had a field day for about one hour as they operated unchallenged. Policemen arrived the scene a few minutes after the hoodlums had fled with their hefty loot.

Our correspondent gathered that immediately the hoodlums arrived at the bank, directly opposite the Choba Park (campus) of UNIPORT, they started shooting sporadically to scare passersby on Choba-NTA/East West Road.

The booming sound from the guns and dynamite made pedestrians and motorists to run for their lives, causing pandemonium, with many persons injured in the process.

In the confusion, many motorists abandoned their vehicles on the main road and fled.

The security personnel on guard duty at the bank were shot in the course of protecting the premises, leading to heavy casualty.

Some unlucky passersby and motorists were hit by stray bullets as they scampered for safety in different directions with witnesses thinking that Boko Haram suicide bombers were operating because of the heavy sounds of the sub-machine guns (SMGs) and AK-47 rifles used by the criminals.

The witnesses added that some employees of the bank, especially those balancing their accounts, were still in the bank when the hoodlums arrived, with some of them injured as they were forced to lie face down on the floor.

The Spokesman of UNIPORT, Dr. Williams Wodi, in a telephone interview said the robbery led to confusion, but it took place outside the campus.

Wodi, also a lecturer in UNIPORT’s Department of Linguistics and Communication Studies, added that he was almost caught in the crossfire, as he was attending a crucial function on campus.

The Rivers police Spokesman, Ben Ugwuegbulam, in a telephone interview confirmed the robbery, but said men of the command reacted swiftly and immediately moved to the scene, and confronted the hoodlums.

Ugwuegbulam said policemen were on the trail of the armed robbers, expressing optimism that they would soon be arrested and prosecuted.

Is this a new trick they learnt from Boko Haram?

I Pleaded Guilty To Save Nigeria From Embarrassment – James Ibori
Shameful: Police Now Use Tree Shade As Area Office