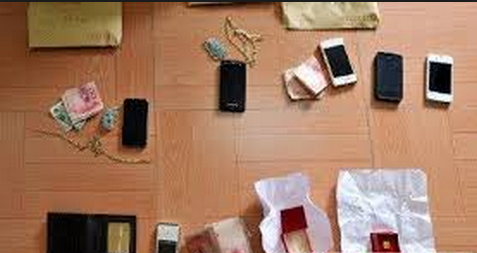 It was a day of regret for customers who lodged at a popular hotel in Amuwo Odofin, Lagos yesterday following an early morning invasion by armed robbers.

The gang, numbering about 20, it was learnt, gained access to the ‘tight security’ street not far from Divine Estate, and forced lodgers in the suites to transfer money through token and other Internet banking methods.

They were said to have stormed the premises around 12:30am and moved from one room to another demanding ATM cards, pin numbers from the owners at gunpoint, which they passed to other members of the gang to use at a bank located on the other side of the road.

A source who does not want to be named said the robbers ordered their victims to remove their simcards from their phones to prevent them from seeking help.

“I am still in shock.A friend of mine came into town and so, I went there to be with him. I was there and I just thank God that I don’t have neither ATM no token.
“We were already in bed when it happened. It was around 12:30am. I don’t know how they opened the door but immediately they came in, they told us to submit our phones.

“We did not argue with them. They said they were not interested in taking any of our gadgets because we would use the gadgets to make more money that we should remove our sim cards from our phones.
“About five men came inside the room and they all had guns. I was already panicking. So, my friend complied with them. The next thing, they said we should bring out our ATM cards and write down the pin that if we like our lives, we would not try to give a wrong pin.

“Fortunately, I don’t have an ATM card because mine has expired and I have not gone for a new one. My friend gave them his ATM and wrote down his pin for them and before us, they handed it to one of the members who went out with it.

“Later on, we were taken down and to my surprise, I saw many other people who from the looks on their faces, have had similar experience.
“That was where we all waited at gun point until the about seven men wearing caps and dark shades, who had gone to use the ATM cards returned and dropped them for the owners to sort out.

“It was when they left that one of the customers disclosed that he was forced to use his token to transfer N2.5 million to the robbers’ account. He said when they told him to bring his ATM card, his token fell and they asked him to return his sim card into his phone and do mobile banking.

“He told us that they checked his account balance and put a gun to his head to transfer the money to the account number that was dictated to him.

“Everyone was in shock and we could not go back to sleep. I am still very shocked because I thought things like that can only happen in films. I know that the street has very tight security. There are Bakassi boys even engaged as vigilantes boys.

Asked if the matter was reported at the police, the source answered in the affirmative, adding that most of the victims followed the hotel management to Amuwo Odofin police station.