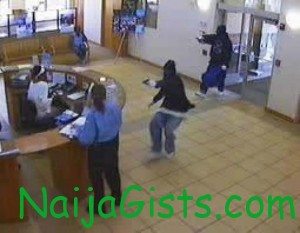 In the attack, the armed robbers injured a female guest after robbing other guests of their jewelries and cash.

They also snatched the wedding rings for the bride and groom.

According to a witness, the robbery took place around 6:45pm.

Here is what the witness said:

“They used a bus to block the only entrance to the popular event centre located on Olaniyi Street in Abule-Egba before they started dispossessing people of their belongings,”

Police were called in but they later arrived 15 minutes after the robbery only to arrest the wedding guests.

When the police arrive the scene, they arrested everybody on sight which includes the event centre staffs. They claimed we have to come and witness to the robbery at the station.- a witness said.